Interview #05
The Sensorial World and the “Brain” of Living Things

Our ”senses” seem intimately linked to our ”selves,”
but while we live in the physical world,
our selves are always turned toward the sensorial world created inside our brains.

Born in 1947. Professor of informatics, Kyoto University. His main fields of research are biological information processing and sensory physiology.

The Body Has No Sensors

Recently, it has become popular to try to build robots equipped with the five human senses. By furnishing robots with sensors, they would become just like human beings, or so many people seem to think. However, the ways that humans and robots grasp the outside world are totally different. First of all, I’d like to make a brief explanation of the human senses.
We believe that colors and sounds, sweetness, smells, heat and cold are there outside our bodies and that we perceive them through our senses. However, physics has made it clear that the only things that exists outside our bodies are physicochemical things like electromagnetic waves, air waves, chemicals, and temperature (molecular motion). “In the physical world, there are no such things as colors or warmth or coldness or sounds,” as the late Professor Shinichiro Tominaga expressed it.
In order to treat epilepsy, the Canadian neurosurgeon Wilder Penfield created maps of the areas of the brain related to the senses. He stimulated the somatic sensory areas of the exposed brain of conscious patients with electric probes and asked the patients what sensations this produced. When different locations were stimulated, the patients reported that they felt how their face or arms or legs were being touched. When the auditory area was stimulated, they said they heard a knock on the door. All these things that we experience as being outside ourselves – colors and sounds, heat and cold – are in fact a virtual reality that the cells of the brain create in our minds, a sensorial world inside the brain.
How, then, can we relate the exterior physical world to the interior sensorial world?
Physiologists usually explain the sense receptors as transducers that convert physical quantities into a code in the form of impulse firing rates, that is then sent on to the brain, where it is subsequently decoded. However, if this was true, then when the brain has deciphered the code for a temperature, for example, it ought to return the original temperature. But there is no thermometer inside the brain. What we feel is if it’s hot or cold outside. Since the physical world and the sensorial world are completely different, they cannot be connected through some kind of conversion-based code transmission.
The skin has low temperature receptors that only give rise to impulses when the skin temperature falls below a certain threshold. This reaction has led me to the new notion that the low temperature receptors are in fact switches that compare the skin temperature to the threshold value and only emit an activation signal when it is lower. Correspondingly, there are also high temperature receptors that only give rise to an impulse when the skin temperature is above the threshold, and these too can be thought of as switches in the same way.
When the skin temperature decreases, the low temperature receptors send an impulse through the axon to the brain, where it activates a target cell. However, when the skin temperature decreases, that person also experiences a sensation of chilliness on that piece of skin. This, I think, is because when the impulse activates the target cell, the “information” in that target cell is expressed, causing the feeling that the skin is cold. This also corresponds to Dr. Penfield’s results that sensations are experienced when brain cells are activated by electric stimulation.
You could think of the sensory system as a musical instrument equipped with a keyboard and a comparator. An external physical quantity selects and plays only the appropriate keys. The target cells connected to the pressed keys are activated and express their “information.” At that moment, the sensorial world of heat and cold, colors and sounds appears before your eyes, a sensorial world that closely corresponds to the physical world.
Musical instruments are no transducers, and that is precisely why they can connect two worlds in different dimensions. Humans cannot experience the electromagnetic waves, air waves and temperatures of the physical world directly. We can only grasp the external world through the artificial reality of the sensorial world that our brains create for us, full of colors and sounds, heat and cold. The sensorial world is all we can understand. That is why we feel that the sensorial world is really outside of us.
Thus mechanisms for grasping the outside world used by artificial systems that are based on the transmission of symbolic information are fundamentally different from sensory systems that are played like musical instruments. No symbols whatsoever are used inside the brains of living creatures.

The Brain of a Paramecium?

I said that when physical quantities are applied from the outside, the corresponding “information” appears. But in what form and what substance is this information written, then? So far, most research has been done on humans and rats. However, the human brain contains an enormous number of brain cells, over 10 billion of them. This means that it is extremely complicated to investigate which cell is the target cell or in which substance the “information” is written. That is why we decided to approach the problem by studying animals with only a few cells. After considering some other candidates, we eventually arrived at unicellular organisms. 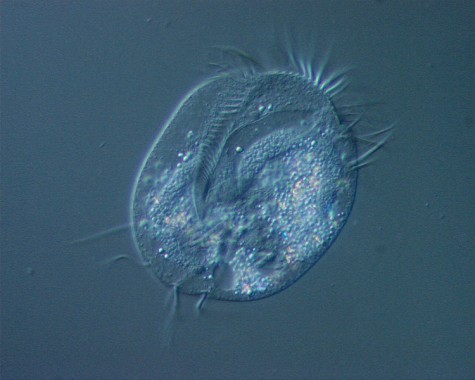 Euplotes aediculatus, a unicellular organism that looks just like a water flea. 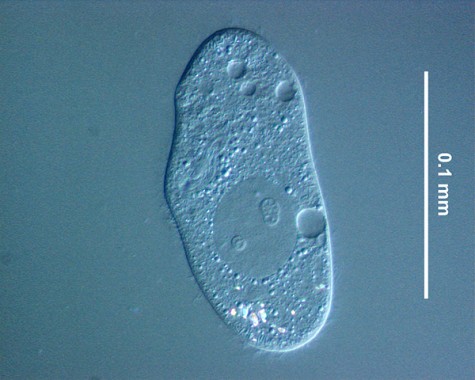