Interview #03
The Wonder of Life as Seen in Slime Molds

With their unique property of changing from animals to plants in a very short time, cellular slime molds conceal one of the mysteries of life.

Born in 1942. D.Sc. in physiology from Osaka University. Professor Emeritus of Tohoku University. Specialist in cytogenetics and the author of several books on slime molds.

When you mention slime molds, many people think of the world-famous Japanese natural historian, Minakata Kumagusu. However, while he studied a group called “acellular slime molds,” I study another group called “cellular slime molds.”.
My first encounter with cellular slime molds (or just slime molds, for short) was right after I had entered graduate school at Osaka University, when I visited all the different laboratories in order to decide on a research theme for myself.
At that time, there was a teacher who had brought back some slime molds from America, and I had the luck to see them. I was immediately captivated by their curious way of life, and have spent over 40 years since then studying them.
Minakata Kumagusu probably never heard about the existence of cellular slime molds before he died. If he had, I’m sure he would have studied them with the same passion as he did the acellular slime molds.
Slime molds aren’t very well known among the general public, so people are always surprised that such unique creatures actually exist. Let me explain how these “Fairies of the Forest,” as they are sometimes called, live in their natural environment

From Animals to Plants Overnight

Slime molds are unique organisms that are widely distributed over the top soil. While they grow, they are amoeba-like single cell organisms, but when they are surrounded by plenty of foodstuffs (primarily bacteria) they become gluttonous and start multiplying through cell division. Then, as they run out of food again (e.g. enter a state of starvation), they suddenly take a completely different course of action.
All the slime molds, that so far had moved around separately doing nothing much but feeding and propagating, rapidly gather in one place to form a multicellular swarm. Soon a hemispheric mound has formed, consisting of 100,000 to 500,000 cells. Milky protuberances shoot out like horns from the surface until it resembles a slug (a so-called pseudoplasmodium) and starts moving. The pseudoplasmodium is a multicellular body that beautifully unites a myriad of cells through morphogenesis and specialization. 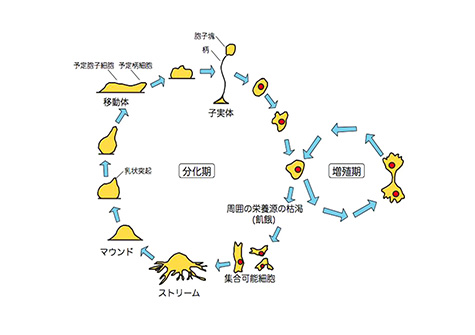 This splendid cooperation is quite impressive and is to a large extent due to a substance called “cyclic AMP” (cAMP), which plays a very important role in the information transfer between the cells. It is also cAMP that sends out the signal to “Gather here and form a mound!” when the slime molds are in a state of starvation.
Eventually the pseudoplasmodium stops moving and prepares for its next transfiguration. This time, stalks, so called “fruiting bodies,” shoot out with clusters of spores at their tips. The slug-like thing that moved around just a little while ago has now all of a sudden transformed itself into a plant! Not only that, but the whole process from the state of starvation to the formation of fruiting bodies takes only about 24 hours – from animals to plants overnight, indeed. 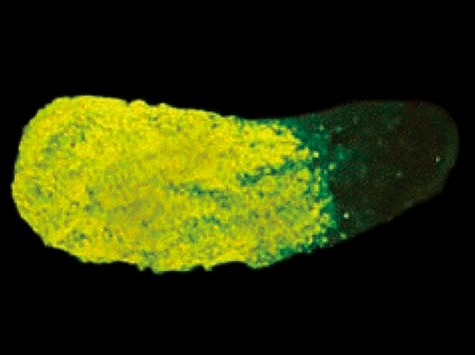 The spores that are released from the fruiting body fly away, germinate, return to an amoeba-like state, and begin to propagate anew. The cells that made up the stalk of the fruiting body die.
Above, I described the pseudoplasmodium as a myriad cells united into a multicellular body. Some cells become spores and survive to the next generation, while other cells become stalks and die. This differentiation is already clearly visible in the pseudoplasmodium, and depends on where the cell happens to be in its cell cycle when starvation sets in. That is, its fate is decided purely by chance. When I see those cells that do their share for the coordinated actions of the pseudoplasmodium even though they won’t survive themselves, I can’t help but being reminded of the cruelty of nature. Recently, molecular biologists have also become interested in analyzing this altruistic behavior.
Slime molds are also very useful as model organisms. Model organisms are organisms that can be used to study various universal phenomena of life. Apart from slime molds, other frequently used species are for example colon bacteria and yeasts, animals like nematodes, fruit flies and mice, and plants like Arabidopsis.
Slime molds’ mechanisms of development and specialization are simple, and the fact that their transformations can be observed in a short time is a big advantage. Their genome has already been sequenced, which makes them very convenient for studying the results of genetic manipulations, and they are gathering increasing attention worldwide.

A Sense of Life’s Wonder

I have been studying slime molds for many years, but I still get excited when I look though my microscope. However, when I see the young students of today, I often worry that they are far too cold-minded. Getting surprised when you see something strange and then getting desperately curious to find out how it works – those are essential qualities for a researcher. I often tell my students to look carefully at their objects of study – if they let their attention slip, they might overlook something important. At the very least you have to be able to tell whether the slime molds you’re looking at are sick or healthy.
The truth is only revealed to those who look at things with affection. 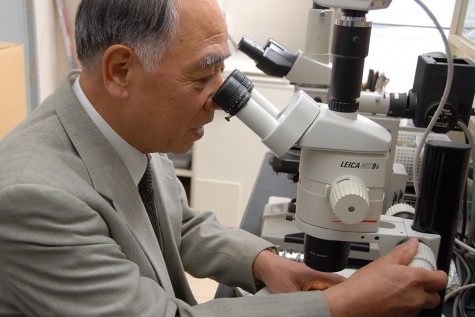