Death is the inevitable fate of all living things.
But somehow nature has produced a strange creature that seems to live forever.

Born in 1952. PhD in zoology from Hokkaido University. Associate professor at the Seto Marine Biological Laboratory, Kyoto University. He is the author of a number of books about marine organisms, and has also released several CDs of songs about Turritopsis nutricula with his own lyrics!
http://www.benikurage.com

At present, there are about 1.44 million living species on our planet – and that is only the ones that have been recorded. The animal world is divided into phyla, classes, orders, families, genera and species. If you count closely, the phylum level is divided into approximately 40 groups, and in those 40 groups 95% are marine life forms. In fact, half of the groups are only found in the sea. This shows how much more varied the creatures living in the sea are, compared to those that live on land. The coastal waters of Japan are blessed with a particularly broad diversity of living things, thanks to the wide variety of environments all the way from wetlands to ocean depths, where warm streams clash with cold streams. Many foreign marine biologists envy us here in Japan.
My own specialty is jellyfish, and they are also extremely variegated creatures. Taxonomically, they belong together with corals and sea anemones to the cnidarians, but in a broader sense the group also includes ctenophores like comb jellies.
In the case of siphonophores like the Portuguese Man o’war, a whole colony of individuals with specialized functions for reproduction, feeding, attacking or floating (i.e. swim bladders) grows from a single fertilized egg, but then gathers back together to form something very much like a single organism. Indeed, it might be better to speak of the organs of a body, rather than a colony. By the way, the swim bladders of the Portuguese Man o’war are full of deadly poisons like carbon monoxide and nitrogen.
The strangest of them all, however, is the “Immortal jellyfish,” Turritopsis nutricula, which I think is perhaps the most mysterious creature on our whole planet. 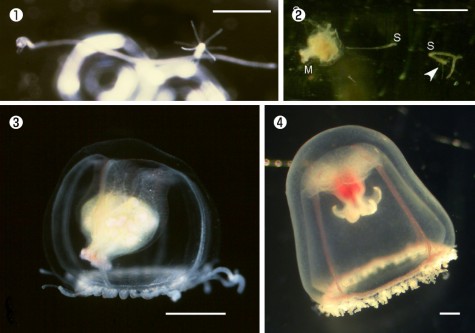 The Discovery of an Immortal Animal

Unicellular organisms that propagate through division may be a different story, but all multicellular animals eventually die. Death is the inescapable fate of organisms that become multicellular and reproduce sexually. The structure of the so-called telomeres at the end of chromosomes are the ticket to cell division, but for example in the case of humans, cells can only divide about 50 times before the telomeres wear out. For this reason, telomeres are considered profoundly related to aging and death. People grow up, have children (or not, as the case may be) and then wait for death. Same thing for fishes or insects.
Turritopsis nutricula, however, can grow to adulthood, have offspring and then grow young again, any number of times. Nobody believed that such a creature could exist until the eternal life of Turritopsis nutricula was discovered in 1992.
Like human beings, Turritopsis nutricula have males and females. The females produce eggs and the males produce sperm. As the division of the fertilized egg proceeds, it first turns into a larval form called a planula, with the tiny spinning hairs that are characteristic of cnidarians, then it grows bowl-shaped, attaches itself and enters a plant-like polyp stage. Once it has struck root, sprouted a stalk and a flower-like part, it is a fully-fledged polyp. Before long, the polyp grows big like a lawn or a bamboo grove, with branches with berry-like things on them. It is from these “berries” that the so-called medusas swim out into the sea during the warm season. In the beginning they are only 1 mm or so, but in 10 days they grow to around 10 mm, feeding on the larvae of small fish and shrimp. What we usually call jellyfish is this adult stage, the age of reproduction. Usually, the next stage is death. Other jellyfish die and melt away after reproducing. First they curl up into something like a meatball and then dissolve into nutrients in the sea. However, when Turritopsis nutricula reach the meatball stage, they return to the bowl-shape and become polyps again. In other words, they don’t grow old and die, they rejuvenate.
Since this process can be repeated any number of times, there is even a possibility that genetically the same individual has been around ever since Turritopsis nutricula first appeared on Earth!
The cell structure is different between the medusa stage and the polyp stage, so normally it shouldn’t be possible to return from medusa cells to polyp cells. In humans, for example, it isn’t possible to create brain cells from cells that have differentiated into muscles. However, that is exactly the kind of magic that Turritopsis nutricula performs, leaving both descendants and itself behind.
Recently, a distant relative of Turritopsis nutricula called Laodicea undulata has been found to use the same trick. Perhaps there are others, but at the moment only these two species have been discovered with this highly particular way of life.
Cnidarians are ancient animals. Back when there were both sexual and asexual generations and the sexual generation ought to have died off, it probably developed a function to recreate the cells that should have been abandoned and thereby enabled it to return to its old form. It certainly is a species that lets nothing go to waste. 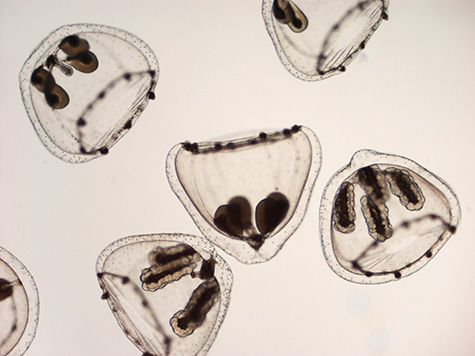 Male and female medusas of Eugymnathea japonica that have separated from their bivalve hosts. 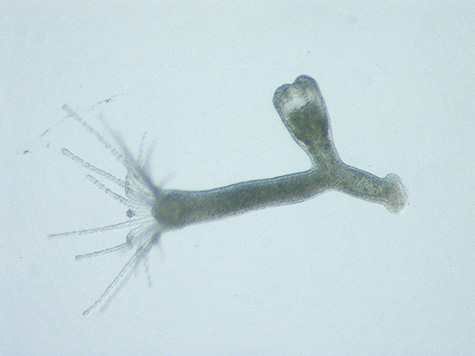 A polyp of Eugymnathea japonica sprouting a young medusa. Removed from the soft part of its bivalve host.

Medusas Swimming Out at Twilight

The sensory organs of jellyfish are also very curious. At the polyp stage they appear to be sensitive to light and to taste, but so far nobody has been able to find where the sensory organs are located. The sensory organs of the medusa stage, on the other hand, are well known. Turritopsis nutricula, for instance, has a red eyeball at the back of the base of each tentacle. Actually, it is not so much an eyeball as an eyespot; there is a group of pigment cells that are sensitive to light, but the spot doesn’t form images. The organogenetically more evolved box jellyfishes, however, have well defined eyeballs with both a lens and a retina to create images. You frequently hear how well developed the eyes are of octopi and squid and the other cephalopods, but the eyes of the box jellyfishes are also quite sophisticated. But unlike octopi and squid, box jellyfishes have no brain, so it’s a puzzle how they really use their vision. They are clearly able to find prey, escape from enemies and distinguish between light and darkness. Somehow such judgments are possible even without a brain.
Eugymnathea japonica lives inside the shell of bivalves and grows a polyp on the soft part. The other members of the Narcomedusae family grow their polyps in colonies, but as soon as Eugymnathea japonica has created an offshoot, it separates from it. Since it lives inside a shell and doesn’t have to worry about external enemies, it is the only thecate (which means “having a sheath”) that doesn’t actually have any sheath. It is rather “nonchalant” and hardly responds even to physical stimulation. But when summer comes around, it creates a medusa for sexual reproduction and swims out of the shell, just like Turritopsis nutricula. This always happens at sunset, and for all the medusas at the same time. These medusas consist almost entirely of gonads and gelatin, and have no functions for feeding or anything except reproduction. Since they quickly melt away, they synchronize the timing when they swim out into the open sea to efficiently encounter medusas of the opposite sex. I’m sure that they too feel something special as the sun sets.