Interview #01
The Diversity of Tropical Rainforests and of Human Beings

Life forms have diversified and grown into a complex ecological system by depending on each other. Humans are no exception

Born in 1959. PhD in botany from Kyoto University. Professor at the Research Institute for Humanity and Nature, Kyoto. His specialty is ecology, and he is also the author of many books on rainforests, the global environment, and other related topics.

Tropical rainforests have an incredible variety of life forms. The biomass of the coniferous forests of Siberia is also very large, but there are few species and almost all plants are of the type that scatter their seeds as air-borne pollen.
In rainforests, however, most seeds are carried by animals, and this is probably one of the reasons why there are so many different species. If the same kind of tree is found everywhere the pollen may fly around at random. But if the density is lower – say, only a single tree of that species per hectare, or two trees in ten hectares – then a mechanism for finding an appropriate target becomes necessary, or the system will be extremely inefficient. Rather than scattering its seeds at random, it is more convenient for the plant to let some animal carry them to a suitable destination. In a rainforest where there are maybe 300 different plant species in a single hectare, or 1000 species in 50 hectares, most plants would probably not survive without the help of animals. The result is a symbiotic network, where every species supports, and is in turn supported by, a range of other species.
The conifers of Siberia appeared on Earth long before the plants of the rainforests, but through evolution the latter’s relation to other living things has grown ever tighter, so that they now are completely dependent on one another. Ecologically speaking, the process by which the angiosperms are winning over the gymnosperms is surely to a large extent due to their “extended phenotype,” that is, their utilization of insects, birds and mammals.

The existence of fungi (mushrooms) is also very important. Fungi like matsutake mushrooms and truffles are known as ectomycorrhizae. The dominant species, that is to say the flourishing tree types that make up most of a forest, all live in symbiosis with ectomycorrhizal fungi.
Of course, all plants have a larger or smaller number of symbiotic or parasitic microbes living around their roots, but the filaments of the ectomycorrhizae continue to spread through the surroundings. In water, the roots of plants can absorb nutrients through convection, but in soil matter hardly moves at all and the plants are are unable to reach sources of nutrients even a mere 2 millimeters away. Fungi, on the other hand, can easily stretch out their filaments in three dimensions to take up any nutrients in the vicinity. The nutrients absorbed by the fungi are then exchanged for other nutrients created by the plant through photosynthesis. Utilizing fungi as an efficient way to secure nutrients has proved an extremely viable option in the development of overground vegetation and all the great forests. Pines and other conifers, the dipterocarps of the rainforest, and the beeches of the woodlands all come with their respective ectomycorrhizal fungi. Otherwise, they would never have become the dominant species.
Flowers, fruits, nuts and berries are slightly later options that have also proved highly successful for survival in areas with low population density. 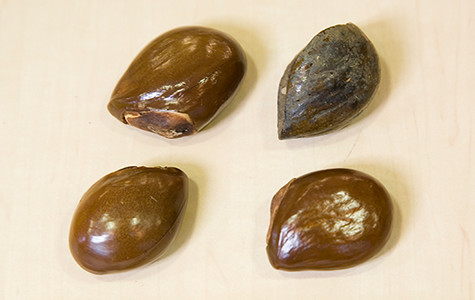 Seeds of Autranella congolensis, another member of the Sapotaceae family (Gabon, Africa). 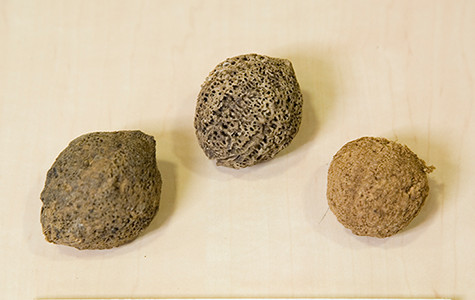 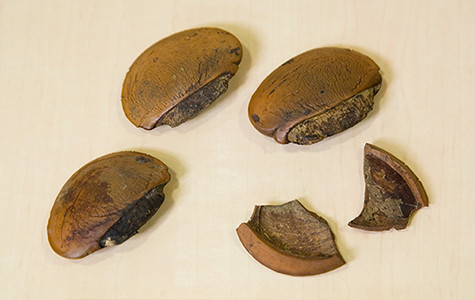 Seeds of Baillonella toxisperma, an evergreen tree of the Sapotaceae family that can grow to a height of 60 m (Gabon, Africa).

For example mice that gather acorns do so to eat them themselves, of course. But then they hide them so that other animals can’t get to them, and the fact that the acorns are hidden away is actually very important. Most acorns that just fall to the ground die because they dry out. While there are plenty of seeds that can survive for decades, acorns fall to the ground in the autumn and have to strike root before winter or they will die. In fact, that is the destiny of many seeds that are loaded with nutrients. Squirrels cover the acorns they have gathered with fallen leaves for their own benefit, but as a side effect it also prevents the acorns from drying out.
In Africa, there are even plants that have their seeds carried by elephants. Those seeds are so big that only elephants can swallow them. The elephants carry them around and then drop them to the ground again with their dung. Elephants wander great distances and trample the vegetation as they walk, but since most seeds need sunlight to germinate, the damage inflicted by the elephants is actually beneficial for the plants. However, elephants are also stubborn enemies of many plants. With their giant molars they crush any normal seeds. Consequently, the seeds that are carried by elephants are extremely hard.
Now, if there were no elephants, the dissemination of seeds would come to a stop in what might be called an evolutionary cul-de-sac. If the elephants were to die out, these plants would most likely die out too, and the many insects that feed on their leaves would also be threatened. This is why protecting the African elephant also means protecting several dozen species of trees, as well as hundreds or perhaps thousands of species of insects.
Obviously, it is not as if animals and plants have made a decision to help each other. Everybody acts in their own interests. They can, however, “guide” each other. Each species uses a kind of trick to control the other for their own benefit, but in the end it works out to the benefit of both parties.
The sense of taste among primates, in particular their fondness for sweet things, is apparently related to the sweetness of fruit. Tropical fruits like durian and mangoes are intensely sweet. They have no trace of sourness, like apples or oranges, they are just very, very sweet. While primates do eat insects and other things as well, they are basically vegetarians, and the reason they are particularly fond of fruit is that the plants have tamed them. This is not the result of any individual training, of course. It is rather that the senses of primates and other fruit-eating animals have been imprinted by the plants over the course of evolution.

Another Kind of Diversity

There are currently around 6000 species of mammals on our planet, but most of them are threatened by extinction. These 6000 species have adapted to a wide variety of environments, but only one mammalian species have spread over the whole globe – man. It is a rather symbolic coincidence that the number of languages spoken by mankind is also said to be around 6000. While this number is a straightforward indicator of the diversity of mankind, the number of languages are also said to decrease to less than half in the next 100 years. This is the consequence of the destruction of both natural and cultural environments, and is yet another global environmental problem. When a language disappears, a bit of history disappears as well, and a culture that was intimately connected with its environment is lost.