Interview #06
Technology and the Human Senses

Man is about to enter a new world,
far from nature, from the real to the virtual.
Where are our senses taking us?

You sometimes hear that since people started using machines, our body functions have grown duller. While it certainly may be true that our ability to walk has declined by driving around in cars, we are now also able to travel much longer distances in a day and take part in a lot of activities that would not have been possible on foot. When people used to write by hand, writers had excellent memories and Japanese writers were able to write a huge number of different Chinese characters, but since the invention of word processing, both composition skills and productivity have improved. Some people said that digital cameras could never compare to the expressiveness of silver salts, but the rapid development of digital cameras have lessened the burden on the photographer, enabling many more people to enjoy taking pictures.
The worlds of the Internet and Virtual Reality (VR) are not the real world that we live in but a different paradigm. Some people who have severe communication problems in the real world become extraordinarily eloquent on the Internet, others are able to display a brilliant creativity thanks to the power of computers.
While we have to be cautious about how far we want to rely on machines, merely emphasizing the negative sides certainly won’t get us anywhere. Instead, we should appreciate all the new possibilities that machines open up for us and learn how to use them. 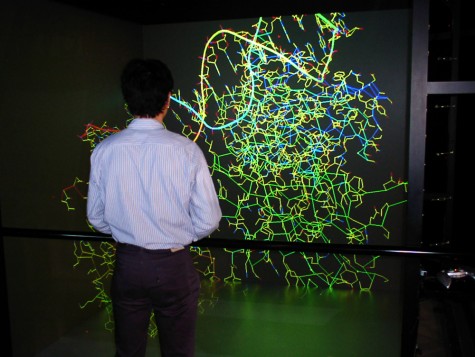 The Spread of a New Understanding

I have worn glasses since I was a kid. This is because glasses expand my vision. Standard glasses correct my eyesight to a normal eyesight of about 1.0, but what if they could improve it to 3.0? What if handicapped people were to get abilities that surpass those of normal people? That would be quite thrilling, I think.
If everybody were to use such technologies, society as a whole might enter a new phase based on the new perceptions. One of the results of the space program is that we are now able to look at the Earth from the outside, from satellites. This has led to an increasingly shared understanding that we live on an irreplaceable planet.
If there is friction between a new technology and society, we can solve those problems by pooling our wisdom. That is what people have always been doing.

Humans integrate information from the sensory organs in their brains in order to recognize the surrounding world. In VR, the integration of sensory data is done by a machine. In other words, it is necessary to construct machines that are as close to humans as possible, and by doing so we are getting to understand how humans perceive the world.
For example, when explaining the mechanism of human vision, it is easy to think of a camera. However, the image obtained from the retina is nowhere as clear as the image recorded on a photographic film. Only the focal spot is sharp, while the surrounding areas are blurry and only vague shapes are recognizable. At most, the eye sees that “something appears to be moving.” This information is all integrated in the head, but strictly speaking not even in real-time. The previous information also plays a large role.
“It’s not such a big deal after all,” you may think, but that is not true either. A dog lover, for instance, is able to pick out the face of her own dog out of a long line of dogs of the same breed. This ability of a connoisseur to recognize minute details in the blink of an eye is something we cannot simulate very well yet.
The problem is the balance in what to focus on. People tend to think that vision, hearing and the other senses are passive, but we now know that they actually have extraordinarily active aspects as well.

Extracting the Essence of Reality

TV conference systems have become very practical. While in one sense it is no longer necessary to gather all participants in the same room, you still often hear that “for serious discussions, we have to talk face to face” or “you can’t read the mood of the room from the screen.” But would this discomfort disappear if we could use 3D technology more freely to get even closer to the real thing? Technology actually seems able to go a very long way towards that goal, but somehow I still feel that it will never be quite the same as “real” reality. Perhaps we ought to be more daring instead and pursue the question “what is the essence of reality?”
Before the Wright brothers succeeded in the first manned flight, many researchers tried to copy the flapping of bird wings. However, it turned out that what is important for flight is the shape of the wings, and not an accurate simulation of birds. Even if they had succeeded in creating a perfect bird-type robot, it would hardly have scaled up to mass transportation planes like Jumbo jets, and today’s aviation industry would never have taken off. By extracting the essence of the real (in this case, birds) it was possible to surpass the real.

Human Subjectivity and the Gap between Genuine and Fake

VR research can help us discover to the essence of the real, and the essence of the human senses. Research in vision has come the furthest, but we are gradually finding out interesting things about the other senses as well. As research proceeds, the new findings are utilized in VR technology, which in turn may lead the human senses to a new stage.
If you color orange juice purple and serve it to people saying that it’s grape juice, apparently most people think that they are actually drinking grape juice. Is this a problem of vision, or one of taste? Perhaps the problem rather lies with our subjective assumptions. Such assumptions are a distinctive feature of mankind. Sometimes we couldn’t care less, but sometimes we are very fussy about the details. The ability to feel the real thing even when we know it’s fake is yet another of our strange abilities.