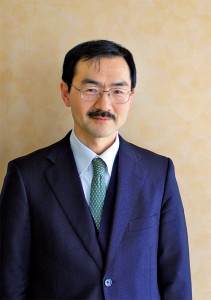 A Brain without a Body

Mind-body dualism, the view that has been prevalent in the West since Descartes, is based on the assumption of the prior existence of a soul or spirit that can somehow affect the body. That view is now shared by many in Japan as well. However, it really is the other way around: The mind is something that is created by the body, and we need to carefully unravel those processes and mechanisms one by one.

There is no doubt that the brain is an extremely important organ when creating the mind. But how a brain would function that is separated from the rest of the body, including the internal organs and sense organs, is very poorly understood. There used to be science fiction stories about isolated brains that were connected to the external world only via sensors. It is possible that such a brain might be able to make full use of its memory to throw out images and ideas. However, it is still dubious whether it could really work without the signals about the presence of a body that drive our everyday consciousness, such as hunger. Although it might be a functional brain, it is quite likely that it would lack a mind. With sensors attached, the senses might remain, but perhaps they would not link to emotions.

The visceral senses have been present ever since the first stages of animal evolution, and maybe because these senses are the very premise of our daily lives they are actually hard to notice, and they have been surprisingly little studied. However, even if the external conditions are constant, our mood changes from moment to moment. If you imagine that your mood would be constant as long as the input to the so-called “five senses” was kept constant, that is not at all the case either. Rather, there are countless occasions when one can’t help thinking that information from within the body affects our moods. In psychosomatic medicine, there are many cases where the patient’s condition changes because of external stressors, but there are also many examples of how the patient’s physical and medical condition and mood all change due to information from inside the body.

Pain is usually considered a cutaneous sensation, but recent studies show that it is rather a visceral sensation. The pain circuit called Lamina 1 is shared with the visceral senses, and pain is now known to be a different kind of sense than touch or temperature. The pathways are anatomically different as well. Pain, including cutaneous pain, should be counted among the visceral senses. Pain is a sense that is related to extremely dangerous conditions and life-threatening situations, and the other visceral senses are also directly involved in sustaining life.

Interestingly, these pathways lead via the parabrachial nuclei in the brain to the amygdala, where emotions like anxiety and depression are formed. According to researchers who have studied the mood swings of cancer patients using brain imaging, patients in the early stages of cancer do get depressed. Changes in the body affect the emotions. In other words, the brain functions change. Meanwhile, other researchers who studied whether depression and anxiety might affect the growth of cancer found that the causal relationship is the other way around: if you have cancer, your level of anxiety increases.

The Diversity of Visceral Senses

Currently, the visceral senses are classified by analogy to symptoms. The most clear-cut one at the moment is physical stimulation. At the lowest level, it is just a feeling. At the next level, it is an unpleasant feeling, and at the topmost level it is pain. Psychical stimulation can be divided into about three levels like that, we believe. However, whether the first level really is homologous to the skin’s sense of touch is still unclear.

The visceral senses are diverse. Heartburn, for instance, which is felt by healthy people too, is a kind of chemical sense. The brain becomes aware of a change in the pH, that is, the concentration of hydrogen ions, in the digestive tract, via sensory nerves. However, research of the chemical senses in general, such as whether to increase the amino acids in the digestive tract or whether to increase or decrease the salinity, is still at an early stage, especially regarding humans.

The urges to defecate and urinate are also visceral sensations that are linked to behavior. Heart palpitation is another common visceral sensation. You may think you are calm and reasonable, but as soon as you become aware of your visceral sensations, you realize you are actually quite nervous. Such conditions have traditionally been labeled “endogenous,” without ever really being explained. Investigating how such states come about and by which route, including cases when there is a triggering external stimulus, and the relationship with memory, are tasks for the future. 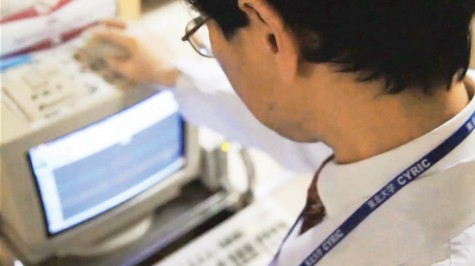 The visceral senses also have a profound relationship with the ecosystem of intestinal bacteria, the so-called intestinal flora. The intestinal flora is different when you are healthy and when you are sick. The concentration of organic acids in the intestines is different as well. Furthermore, the higher the concentration of organic acids is, the worse the disease symptoms will be, with a high correlation. Exactly which substances are produced in the intestinal environment is very important, and patients suffering from Irritable Bowel Syndrome show an increase in the number of nerves that detect such acids in their intestines. That is why cleverly transforming the intestinal bacteria can improve the symptoms in the short term, and change the mood in the long term.

The population of microorganisms in the body is larger than the number of body cells. Apart from the bowels, they inhabit the mouth and the respiratory tract, the skin and the genitals. How all those bacteria affect the body and the mind has been extremely little researched as yet, but it is mainly through the senses, I believe.

When talking about substances that control behavior, an example that is often mentioned is pheromones, that is to say smells. But smells too are related to the products of bacteria. Perhaps the reason why some men are popular with women and others are not might have something to do with the products their bacteria produce. Under stress, both the number of intestinal bacteria and their types change, and pathogenic E. coli bacteria increase, for instance. It’s an interaction where the stress-related neurotransmitter noradrenalin is secreted by the lumen of the gastrointestinal tract, causing an increase in the number of pathogenic E. coli bacteria, while the secretions from the bacteria affect the receptors that control the mucus of the gastrointestinal epithelium, causing the mucus secretion to stop. Both organisms and their moods are dynamically connected to their bacteria. 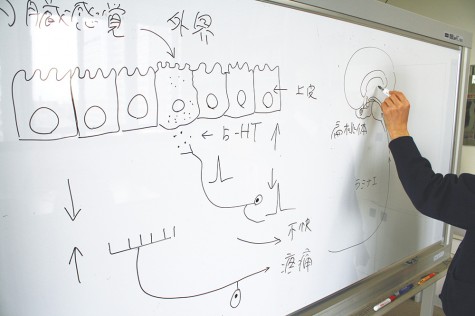 Professor Fukudo illustrates the transmission path for external stimuli from the receiving epithelial cells of the small intestine to the brain.

I believe that the study of visceral sensations may offer an approach to areas that used to be outside the target of scientific analysis, such as moods and feelings. Our research topic is Irritable Bowel Syndrome, which is related to anxiety and depression, but previously that was something typically whisked aside by mind-body dualism as a “combination” of a depressed mind and an abnormal change in the intestines. However, when you pursue visceral sensations, you find that the mind and the body are closely connected. That should give us a hint of how to overcome negative emotions and bad moods by controlling the visceral sensations.

There is still many things we don’t know about why feelings change, often without warning. Not even what a good mood is has been properly researched. The Israeli American sociologist Aaron Antonovsky developed a concept called salutogenesis (“health generation”), based on his research on people who had survived the Nazi concentration camps. The opposite term is pathogenesis (“disease generation”), and usually what medical researchers do, ourselves included, is to work hard to find the cause of diseases, but what Antonovsky proposed was the idea to focus on the factors that make people healthy instead. After his death, you don’t hear much about his theories any more, but it is a very important idea, I think. There are surely many still unclear factors that contribute to make people healthy, and perhaps our visceral senses hold the answers to some of them.