Born in 1954. Professor at the Institute of Industrial Science at the University of Tokyo, and President of the Collaborative Research Center for Innovative Mathematical Modelling. His special fields are Chaos engineering and Applied mathematics, and he is busy constructing a mathematical model of the nervous system based on chaos theory.

The Sensorial World inside the Brain

The brain captures signals from the outside world trough the sensory receptors. Simultaneously with these bottom-up signals, there are also internal top-down signals inside the brain. When input signals are processed, the bottom-up signals and top-down signals always meet. Each follow their own path to the encounter, and through their interaction in the cerebral cortex we recognize the outside world. Thanks to recent advances in neuroscience, the mechanisms and the location of those encounters are slowly being revealed.
Then there is the case when you want to explain the layout of your room, for instance. An image floats into your head without any input at all from the outside. The system originally intended for receiving signals from the senses appears to be running on top-down signals only.
Visual information too is completely reconstructed in the brain; perhaps we might even say that the sensations themselves are created in the brain. The cerebral cortex has a structure made up of six layers, and it is the information processed by that neural network that we recognize as sensory impressions. The brain contains a vast world of memories, including an internal model of the outside world, and the processing of the dynamic interactions between those memories and the input signals is what forms the sense mechanisms in the brains of higher animals.
Those top-down signals are related to consciousness as well, but exactly how they arise is still not very well understood. The prefrontal cortex is also important. In particular, we never simply receive signals from our sensory organs; our attention is always directed towards something. According to the result of the sensory input processing, our attention may shift, consciously or unconsciously. The sensory input and the internal information processing interact dynamically. This is different from so-called filtering. It is always a dynamic process, which inevitably leads to chaotic states.
The fact that two people looking at the same object – or even the same person looking at that object yesterday and today – get different impressions, or see different things, is usually explained as being due to constraints based on experiences and memories, but more generally, you could say it is because of non-linear qualities. For example, ambiguous figures, which are figures that can be interpreted in more than one way, are very non-linear. If you have non-linear qualities and you have dynamism, you get chaos as a matter of course. In the case of the Necker cube, you can switch between the two interpretations just by looking at it, but for instance in a picture that looks both like an old woman and a young girl, you might see just the old woman. However, as soon as you become aware of the ambiguity, you can switch. Among non-linear ambiguities, there are those where the switching is done unconsciously, and those where you can only switch through the intervention of consciousness. Unconscious information processing is also extremely important. 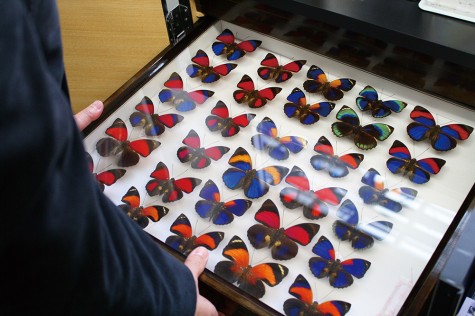 Professor Aihara’s butterfly collection. The generation of patterns on their wings is another source of raw material for chaos engineering.

The Wagging Tail of a Wagtail

In 2010, there was a hugely popular TV series in Japan about the mid-19th century samurai and revolutionary Sakamoto Ryoma. In the Hokushin Itto-ryu school of swordsmanship, where Ryoma trained, the tip of the sword famously flutters up and down, “like the wagging tail of a wagtail.” Now, this wagtail-like fluttering is deeply connected to the reception of sensory impressions. When the sense system is in a chaos-like state of instability, it can instantly respond to any input. If it is in a fixed and immobile state, on the other hand, when an input occurs, the system first needs to move from its resting state to its operative state, and the response will be slow. There are experimental data that show that the activity of parts that receive external information, such as the visual cortex and the olfactory system, does fluctuate spontaneously.
In the case of fencing, the truly efficient wagging of the tip of the sword is most likely done unconsciously. Inexperienced fencers like myself consciously try to wag the tip, but those who can unconsciously create an efficient chaotic state are much stronger. That is because they have already formed a base from which they can unconsciously respond to any condition. Their versatility and their possibilities are also abundant. If you are conscious, you can make a good response to moves that you have been anticipating, but you are also much easier to fool.
In a showdown between two masters, they will interact dynamically as they face off. As they measure each other up, it sometimes happens that the outcome is decided without ever clashing swords. A chaotic state space is created by a strange attractor in that space, and the powers of the chaos are related to the dimensions and topological form of the attractor. There is a possibility that master swordsmen unconsciously sense this chaos. Even external inputs to which their attention is not directed are processed unconsciously. Perhaps a master is someone who can bring out such abilities at any time. We only have a single consciousness, so we can only do one thing consciously at a time. Other things are taken care of unconsciously in parallel. The important question is how high that ability is.
The same seems to be true for mathematical discoveries and other areas as well. The Psychology of Invention in the Mathematical Field by Jacques Hadamard (1945) tells the story of a mathematician who was stuck on a problem in the evening, but had the solution as soon as woke up the next morning. Furthermore, the answer lay in a different direction than he had been thinking. Quite apart from the hypothesis that you are concentrating on and consciously thinking about, the unconscious keeps working on other possibilities in parallel, and by some chance the solution comes to mind almost fully formed. Our consciousness is really the tiniest tip of the iceberg, while the important work is done in the vast realms of unconsciousness down below. Obviously, any problem requires deep and focused thought during a certain amount of time. That is a prerequisite, and it is apparently only then that the thought processes start running in the unconscious too. Thus it is that discoveries are often made unconsciously. It is a funny thing about the brain.

Zen and the Chain of Associations

I am interested in Zen, and a friend of mine who suddenly dropped out of graduate school to become a Buddhist priest told me that the concept behind zazen is to “let go of thought.” When you think about things, a chain of associations forms. Naturally, thoughts pop up in your head during zazen too, but apparently one of the goals of zazen is to remain in a state where you let those thoughts go as soon as they appear. This is actually much more difficult than it sounds. Zen monks spend decades sitting and practicing to reach that state. This is why zazen is completely different from meditation.
Retaining a condition of “letting go of thoughts” is similar to chaos. If you represent the state of letting go of one thought after the other as a straight horizontal line, then following a thought and starting associating from it would correspond to a move increasingly upwards from the line, for example. If you move in the other direction, you fall asleep. Thus the act of retaining a state of neither associating nor falling asleep is similar to a chaotic trajectory, where the tiniest deviation suddenly leads to huge changes.
Now, the state of associating is our normal condition, and it is usually a quality that we try to sharpen. “Letting go of thought” is different, and is a way of returning to the origin of life. Of course it is not possible to maintain a perfect “letting go” state for long. It will fluctuate, and it is precisely that condition that I find chaotic. It is probably also one of the reasons behind the deep connection between Zen and Japan’s performing and martial arts. 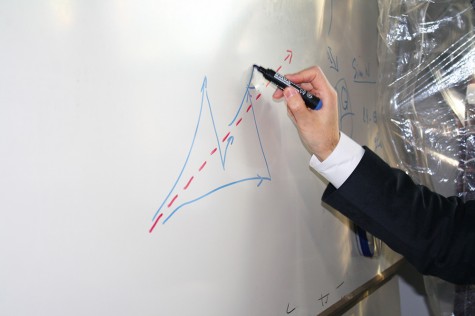 A whiteboard drawing of the Zen state of “letting go of thoughts” (the red line). The upward curves are associations, the downward ones are sleep.

When thinking about biological functions from now on, the concept of homeodynamics will be more important than homeostasis. Chaotic fluctuations are a typical example, and elucidating the homeodynamics in the brain is one of our main themes. The brain is much more dynamic than people generally believe. It is because the information processing is dynamical that we can make ad hoc responses. Conscious thought is only a very small part of the brain’s function, and it is important to come to grips with the unconscious as well. The associative chain too is basically a chain of transient states. So far, science has mainly dealt with how steady states change, but now one of the major goals is to explain the brain’s mechanisms for continuously processing information based on chains of transient states.