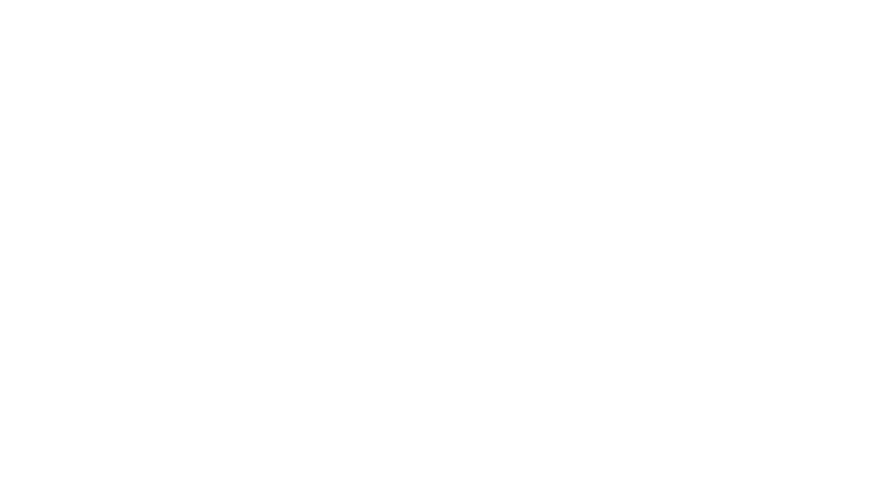 A lens polishing craftsman can feel errors down to the micron scale with his fingertips, a swordsmith treats the heated steel in a matter of seconds, a perfume blender can discern thousands of scents with her nose...
It is slowly becoming possible to replace various elements of craftsmen’s delicate sensibilities with science and technology, but what the craftsmen perceive is not just errors or temperatures or smells. They also control their skills by reacting to the weather at the time, and to sounds and light from the workpiece. Furthermore, in order to become a master of the craft one must be able to respond instantly to totally unforeseen situations and unexpected circumstances. It is when they have to adapt themselves to the moment and play it by ear that craftsmen show their true worth.

◉ When we talk about artisans today, we usually think of people who work with handicrafts, but originally the term referred to people with special skills, such as blacksmiths or gardeners. Along with the development of the money economy and distribution in the Middle Ages came a wide new range of trades. And in Japan, at least, artisans (or shokunin) weren’t just people who made things with their hands. Until modern times, the term covered people who practiced other arts as well: renga poets and dancing girls, temple solicitors and Shinto priests, in other words both entertainers and the religiously employed. They were also considered shokunin, and towns and highways were places where different kinds of shokunin met to exchange goods and services.

◉ The Japanese word for “talent” is “sainou.” The two parts of the word have vaguely different nuances (sai means “aptitude” and nou means “ability”), but they are really inseparable. In ancient times, sai (or zae, as it was pronounced then) is said to have belonged to the material side as opposed to the human side, and nou was the human power to draw out zae from wood and stones, or from the landscape or the weather as the case may have been. It may very well have been considered a magical power.

職, the Chinese character for shoku in shokunin, is a combination of an ear and a magic symbol. (Nin means “person”.) That is to say, a shokunin was somebody with the ability to listen to the voices of nature and gods that ordinary people could not hear. Naturally, it wasn’t just sounds they could perceive.

◉ In the Middle Ages, there was a fashion for poetry contests on the theme of shokunin. It was primarily a game, of course, and the poems were judged according to their merits, but poems depicting craftsmen in the service of the Imperial Court or the aristocracy apparently also had a secondary function of appeasing vengeful spirits and suppressing curses. In a famous episode from the Edo period, the master shamisen player Hara Budayu heard an unusual ring from his strings and foresaw a tsunami; thus he was able to save the lives of his friends.

◉ The ability to sense variations on the micron scale over lenses and metal surfaces with one’s fingertips is definitely transcendental, but the measurement of such purely physical properties will gradually be taken over by technology. But we will probably never see the day when a computer can tell from the timbre of a koto whether the strings are made from nylon or silk, much less how the silk worms that produced the thread were raised or what they were fed. Nor will we have computers that are able to estimate when an old document was written from the smell of the ink.

In order to become a perfume blender, one has to memorize and be able to accurately identify at least 600 different scents. This is still all in the physical domain, but the blender’s art starts from there: the ability to create new, previously unknown fragrances and perfumes, a sensibility that is deeply tied up with likes and dislikes. Such skills are not easily replaced by technology.

In the first place, human sensations are greatly affected by moods and one’s physical condition, and that goes for extraordinary perceptions too. For the time being, even the weather forecasts generated by super computers are still no match for the feelings and intuitions of experienced fishermen. 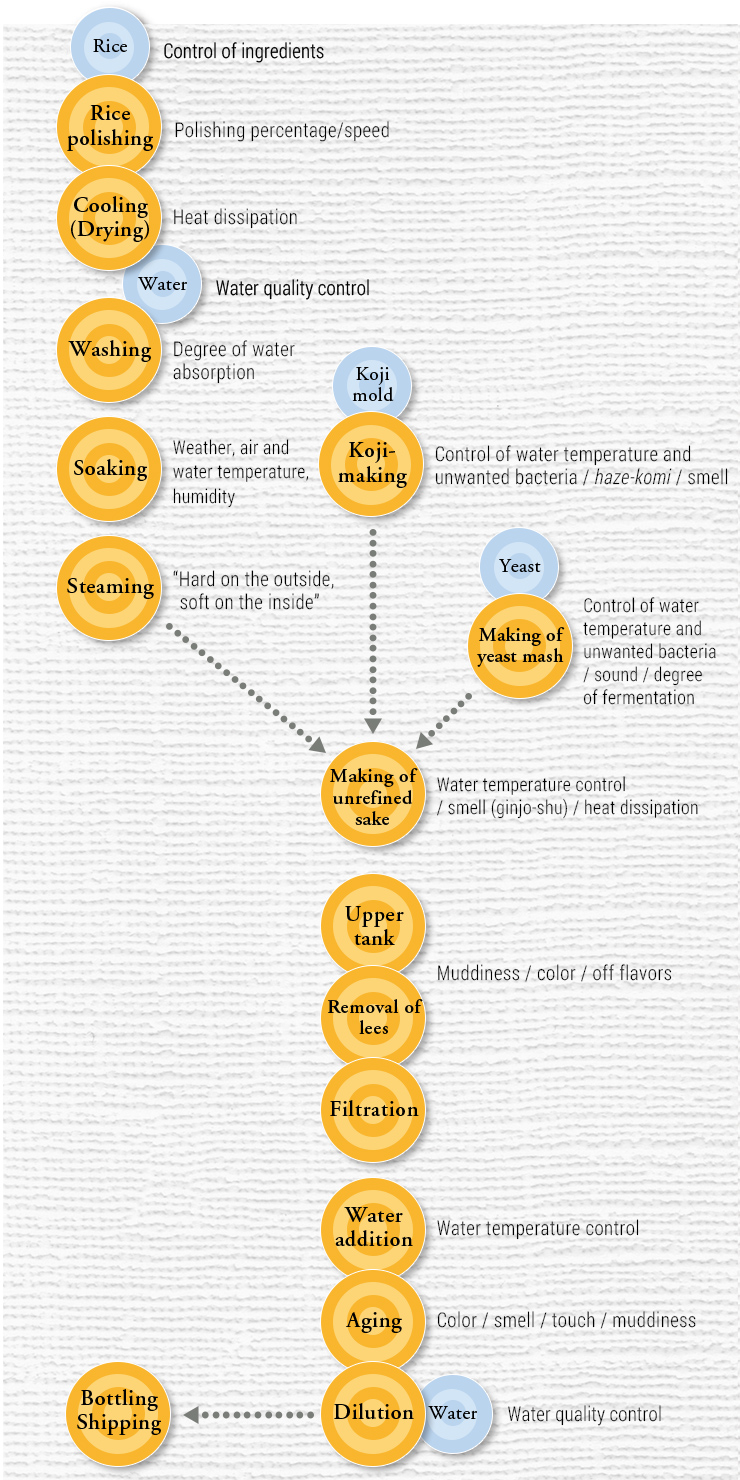 The process for making Japanese sake. Formerly, all the steps were controlled by the brewers’ sensibilities.

◉ Our senses develop as we grow, and are said to reach peak capacity at the time our bodies reach maturity. After that, we may still be able to sharpen our senses through experience and training, but basically their power will keep declining.

It might certainly seem as if adults have a richer sensory world thanks to more refined ways of talking about feelings or the ability to appreciate bitter and astringent flavors, but perfect pitch, for example, is something you are either born with or can only acquire in infancy. Foreign languages are easier to learn the earlier you start. It has to be said, though, that “perfect pitch” is not necessarily an “absolute” sense of pitch, but tends to translate even environmental sounds into the twelve equal temperaments of the Western music scale, and some researchers have also pointed out that starting to learn foreign languages before acquiring your mother tongue might have harmful effects.

◉ To the Japanese, all Indian faces look the same, even though both Japanese and Indians are all Asians. Conversely, Japanese faces probably look very similar to Indian people too.

Recently, the Japanese have become familiar with Western faces through all kinds of media, and have no problem distinguishing Western actors and politicians. But back in the Edo period, all Caucasians looked the same to the Japanese, with the same red face and the same, extremely pointy nose.

If you go to the zoo and watch the monkeys on the monkey hill, very few people besides their caretakers can tell their faces apart. We might just about recognize some individuals thanks to their fur color or size or some distinguishing scars, but for most small children, this is literally child’s play: they have no problem at all telling the monkeys apart. However, as the children grow up, that is to say become accustomed to human society and get used to communicating in words, they lose the ability to recognize the monkeys’ personalities. Apparently our general sensations are established by applying various filters on our original capabilities. And the most powerful filter of them all is language.

◉ For sure, language is an efficient tool for programming and operating the vast quantities of sense memories stored in our brains. One might even claim that this is how humanity acquired civilization. But when language was followed by the invention of letters, our sensations were more forcefully constrained, and at the same time vision came to be overwhelmingly dominant among our senses. Perhaps perfect pitch and equal temperaments impose a constraint on our hearing. Dogs, cats, birds, fish and other animals can sometimes predict earthquakes and changes in the weather, and the reason why humans are so poor at it is likely because language has put the lid on our natural sensations. Our sense of direction and sense of time may also have become duller by civilization and the advance of science and technology. 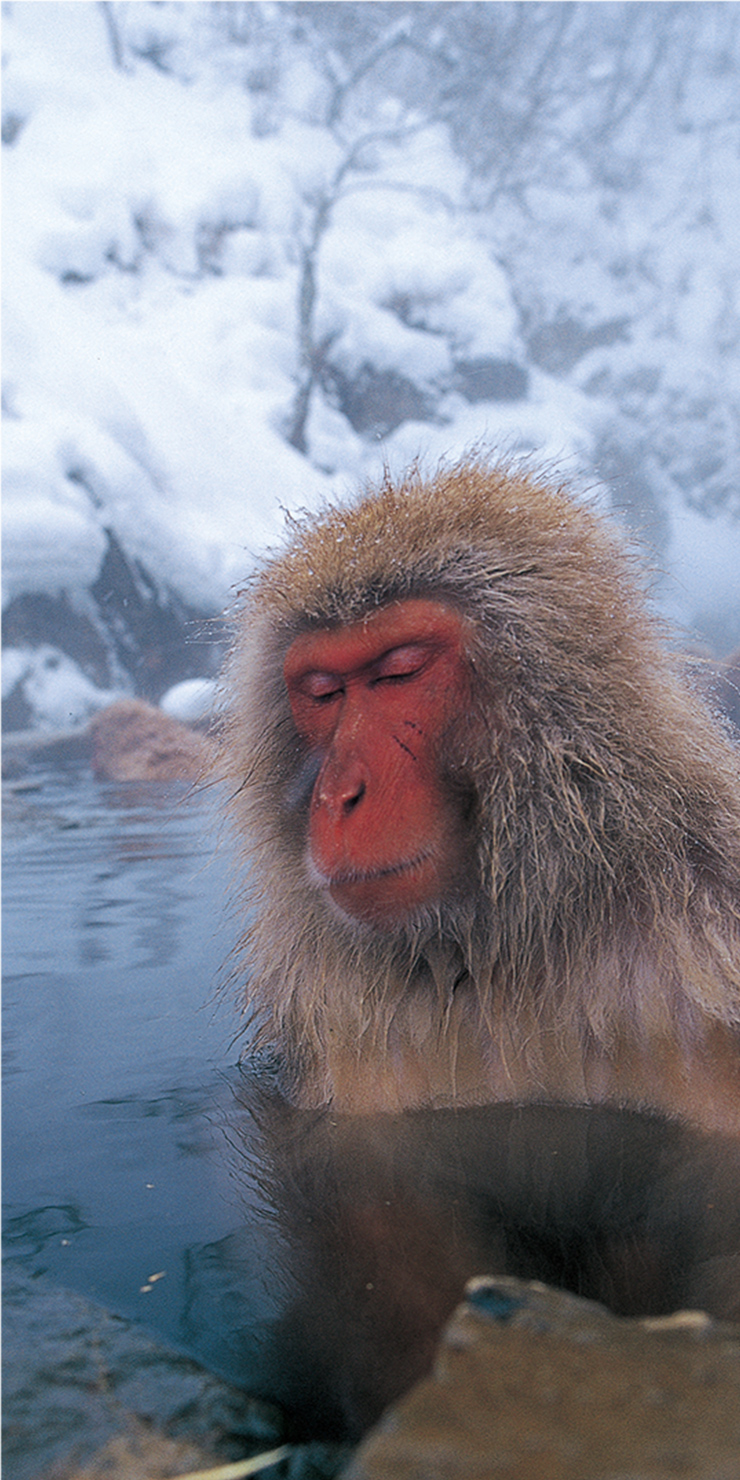 Even if we project ourselves on monkeys, we have a hard time telling them apart.