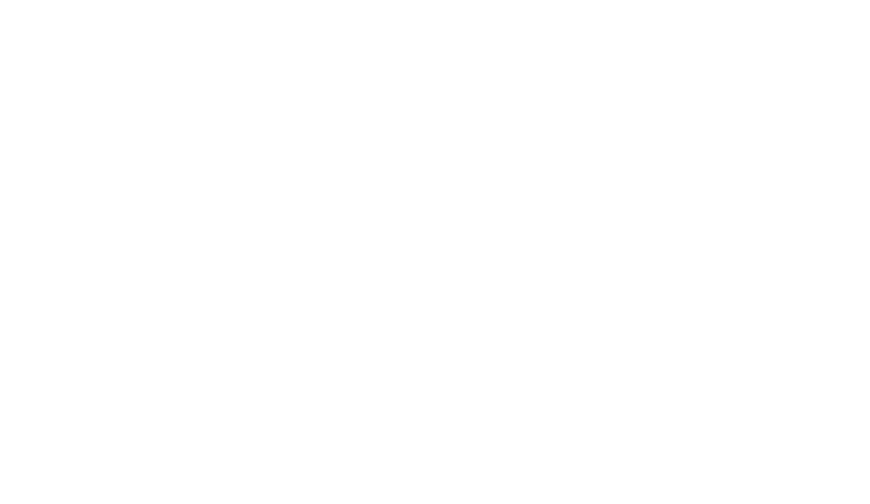 A sensor is of course a device that replaces physical quantities with signals. But although the name means “sensing device,” the sensor itself doesn’t actually have any sensations. When the thermometer points at 0 degrees, it is humans who feel cold – or perhaps warm depending on the circumstances. That is because sensations are born in the “mind.” The human sensory organs also work in a completely different way than sensors. They can be very sensitive to minor changes, but soon become numb when a constant stimulation is applied. And what’s more, there is no way to confirm how that red apple in front of your eyes looks to others.

◉ On sunny days we say that the sky is blue, but that is actually not entirely accurate. It is when electromagnetic radiation from the sky strikes our eyes that we perceive the sky as blue. In other words, the blueness is not a property of the sky itself, it is something we decide ourselves. It is the brain that causes a sensation of blue in response to the electromagnetic radiation from the sky. In that respect, our sensorial world could be called virtual. It also follows that the sky that A sees might not be the same as the one B sees.

But while there is no way to determine for sure whether the skies that A and B see are exactly the same, the system of their brains is basically the same, and as long as A and B can communicate, we can say that what they see must be largely the same as well.

◉ Just because fish have eyes with fisheye lenses doesn’t mean that the world fish see is the same as the world we can see through a camera with a fisheye lens. This is because the system of a fish brain is very different from the system of a human brain. Bees “see” ultraviolet rays, but their world is nothing like the world we can capture with an ultraviolet camera. How one senses the world seems to profoundly depend on one’s “mind” and one’s “self.”

Moreover, sensations are also triggers of feelings and emotions. Regardless of whether the minds of living creatures are only made up of the workings of the brain, it appears that computers and AI systems won’t be able to acquire minds solely by stuffing them full with logic and information.

◉ Being logical and rational are considered important qualities among humans. But just because an argument or a reason is valid, that doesn’t mean it will be unconditionally accepted. If it doesn’t ring true to the brain, it will be rejected as a quibble, never mind how correct and rational the argument may actually be. Our judgments seem to be first and foremost intuitive, rather than logical. Perhaps logic can only be explained as a tiny part of our sensations. That is also why what is considered “logically correct” keeps changing across cultures and times.

◉ Sensations are learnt through experience, and it is also possible to increase their precision. On the other hand, if the same stimulus is repeated for a long time, the sensation becomes dull. Recent data suggest that the senses of modern people have been seriously damaged by urban life, filled with strong lights, loud sounds, and stimulating chemical substances.

Ever since the 20th century, our surroundings are also overflowing with artificial electromagnetic radiation, which humankind had never experienced before. It is still not clear how this environment affects the human senses, but perhaps it has altered our sensations altogether and we may be creating an unknown world where traditional logic no longer applies. 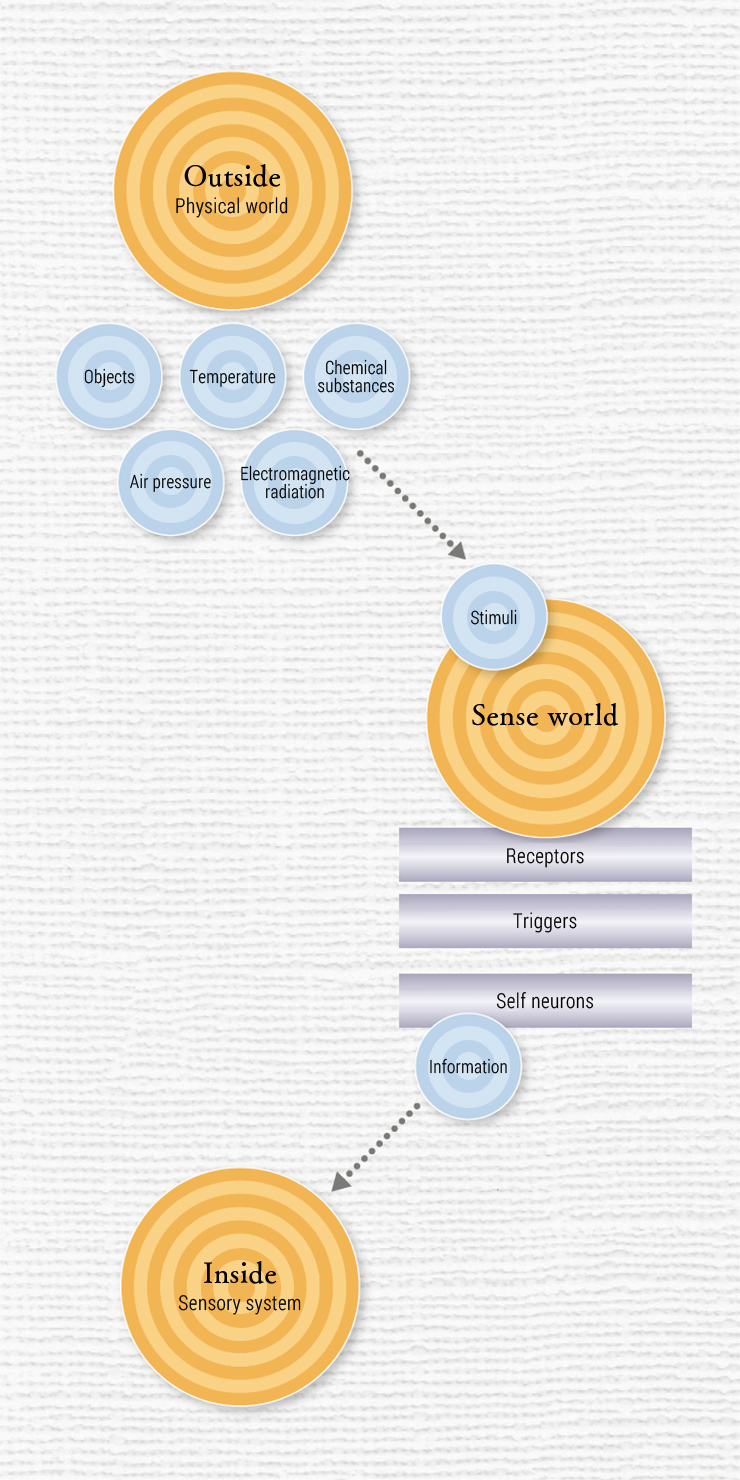 The mechanism of the senses according to the “stimulus receptor = comparator” theory.

◉ E-books are spreading, in particular magazines and comics, and more and more people these days read their newspaper on a tablet. Although the e-book market seems to be getting sluggish in its American birthplace, it is a firmly established medium by now. But while these electronic media are sufficient, or even necessary, for reading contents and obtaining information, there is still something missing from them. You might be able to get by on nutritional supplements, but they won’t let you relish the flavor of a real meal, and the same is true about the pleasures of reading a real book. The act of reading a book does not only put you in contact with the contents. It also seems to mobilize several other of your senses.

◉ It is said that the appearance of things is established by relying on a “reference plane” that perception sets up with respect to space. An opaque surface such as a sheet of paper is a typical example. In contrast, the illuminated surface of a TV screen or computer display does not become such a reference plane as it is; the display is only assumed as a reference plane by visual perception through experience. There is definitely something unnatural about it. That is apparently why our eyes get tired, and the brain gets even more exhausted. People who look at their smartphones for three hours a day on average spend an eighth of their life staring at it. If they live to the age of 80, that will be 10 years of their lives. Computers have been a part of our daily lives for only about 30 years at the most. And just as with the electromagnetic radiation from all our TVs and radios and smartphones, it is still unclear how those non-reference plane displays affect our brains and senses. Research is still at an experimental stage, and the experimental animals are none other than ourselves.

◉ The world of music has also changed dramatically in the modern age, and our environment is full of low- and high-pitched sounds produced by all sorts of machines, buildings and constructions. However, a step backwards was taken in the move from LPs to CDs that cut off sounds outside the audible range, and long before that, when it became commonplace for the music performed on the stage to be delivered to the audience via microphones, amps and loudspeakers. Some claim that music has become impoverished as a result, since the sounds that the ear cannot hear are also part of the music. The microphone was invented only a bit over a century ago. While we are usually blissfully unaware of the noise from the lamps, refrigerators and other electrical appliances in our own homes, we often overreact to the sound of the daily life of our neighbors. Whether the ears of people today have become dull or hypersensitive is not a simple question.

Thanks to the progress of science and technology, our jobs and daily lives have become dramatically more convenient. But sometimes the convenience of our tools seems to make our own bodies, senses and physical abilities feel inconvenient instead. Since the invention of matches, very few people still know how to make fire on their own. 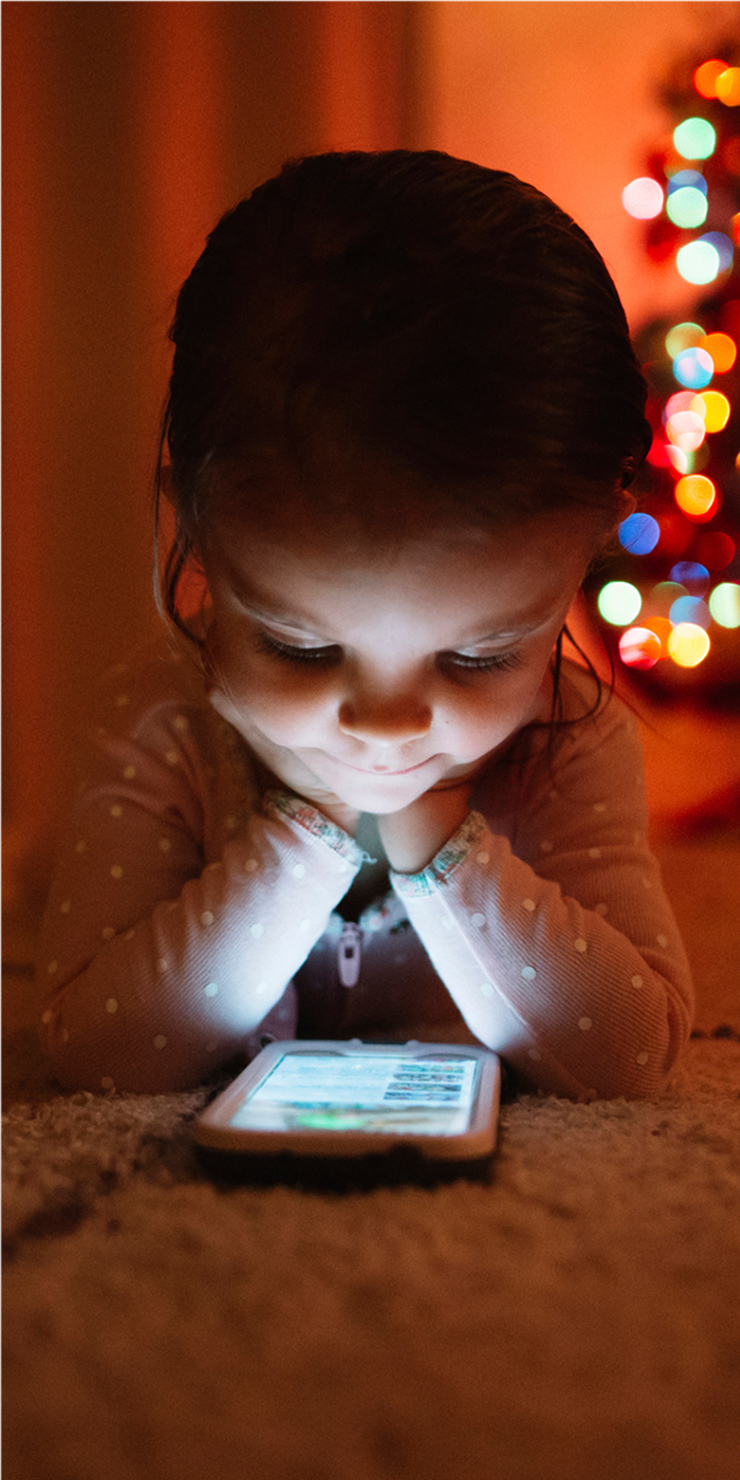 For children, smartphones have been part of their world since the day they were born.