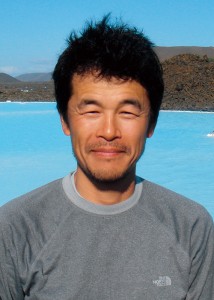 Associate Professor at the International Coastal Center, Atmosphere and Ocean Research Institute, University of Tokyo (AORI). PhD in fisheries science from Kyoto University Graduate School of Agriculture in 1995. In the same year, he became a research fellow of the Japan Society for the Promotion of Science (National Institute of Polar Research). In 2004, he joined AORI.

Bio-logging is the study of the behavior of animals in their natural environment by attaching a small camera to them. By analyzing the measured data, the life modes of various animals are becoming clear, that were previously difficult to study through direct observation. Bio-logging started in the United States; in the 1980s, independent research began in Japan, and by the 1990s, it had spread to the rest of the world. It is still a young field, where Japan actually is the world leader. The first international symposium was held in Japan, and the term “bio-logging” itself was invented here. In that sense, you could say that Japan is one of the origins of bio-logging.
Bio-logging is mainly used to study marine creatures. That is because once the creature dives, we can no longer follow it directly. It has long been the dream of researchers to find out what kind of food seals and sea turtles catch in the water, and how they behave. This dream is now gradually coming true. Furthermore, quite unexpected new discoveries are also being made.

The central measurement device for bio-logging. Attached to a wild animal, it gathers data about temperature, depth, acceleration, etc. By analyzing the data, hitherto unknown facts about animals’ mode of life are revealed. As the devices get smaller and smaller, they can be used for an increasingly wide range of animals, and with additional sensors, new research angles also become possible.

In science class, we learn that reptiles are cold-blooded animals whose body temperature changes according to the ambient temperature, while birds are warm-blooded animals with a constant temperature. However, when using bio-logging to investigate the body temperature variations of sea turtles (reptiles) and penguins (birds) in the sea, the complete opposite result was found. The body temperature of sea turtles does not change, while that of penguins gets lower and lower. When faced with the opposite data from the textbooks, I was very surprised, but also intellectually excited by the fact that there is still a lot we don’t know about the ecology even of very familiar animals.
To reveal the trick, female sea turtles first eat a lot of food and put on fat before entering the egg-laying season. During the egg-laying season she hardly tries to catch any prey, but concentrates on laying her eggs. Although she is essentially in an inactive state, she sometimes dives deeper and encounters colder water. However, since her body is large, it is not affected by changes in the water temperature over shorter periods. Penguins, on the other hand, try to minimize their oxygen consumption as much as possible in the water and lower their metabolism in order to be able to dive longer. That is why their body temperature drops. This was a new discovery thanks to bio-logging.
“How come we didn’t know that already?” some people might wonder. It is simply because until now, no researcher had ever measured the body temperature of sea turtles or penguins in the water. Scientists like to appear as if the know everything, but actually there are lots of things they are forgetting. Things that make you go “No way!” remain black boxes.
Bio-logging is low key, but it might lead to great discoveries. I feel it has a real possibility of doing that, and that is why I have devoted more and more time to it.

No Guarantees for the Future, but Success Is Intellectually Stimulating

Currently, universities and institutions doing bio-logging research are on the increase all over Japan. They attract animal-loving young people: most of the researchers are in their 20s and 30s, so the staff is fresher than in other fields.
Youth means that they are not yet bound by fixed ideas, but can freely come up with ideas of their own. Their flexible imagination is very stimulating.
Research is mostly field work, very much hands-on. What you don’t understand in the lab can be checked in the field. Although we use high-tech devices like data loggers, in actual fact we spend almost every day drenched to the skin, covered in mud and wrestling with animals. But that is fun!
However, bio-logging itself is a young field, the number of researchers is still low, and there are no guarantees for the future. There are no brilliant opportunities on offer, and indeed researchers may find it hard to support themselves. Even so, I’m truly happy to say that a number of students come knocking on the door of my lab every year, saying “I want to do bio-logging.”
Many kids love the zoo, and love reading picture books about animals. I want those kids to remember the word “bio-logging” too.

The University of Tokyo’s Atmosphere and Ocean Research Institute, where I work, had a research center in Otsuchi, Iwate Prefecture, where we collected bio-logging data every year from 2004. The targets were large fish, streaked shearwaters (a kind of seabird), and sea turtles. However, on March 11, 2011, the center was destroyed by the tsunami, and there are still no firm plans of reconstruction. Nevertheless, we continue with our research, to clarify how the marine nature around Sanriku has changed after the earthquake.
Many manmade objects were swept out to sea by the tsunami, and major changes are expected to have occurred in the marine ecosystem, but I want to see how it has affected the ecology of wild animals. We can’t let ourselves be discouraged by a once-in-a-millennium disaster, but should record the changes properly. Many researchers from other fields as well are now focusing on the Sanriku coast, and I would like to make my contribution via the approach of bio-logging. 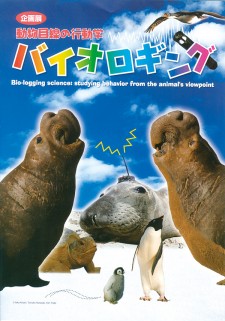 Column 2
The Exhibition “Ethology from the Animals’ Point of View”

An exhibition about bio-logging at the National Museum of Nature and Science in Tokyo from December 2011 to March 2012. Young researchers from all over the country came up with ideas to present the fascination of bio-logging to children.

The Development of Bio-logging and Research with Margins

As the data loggers get smaller, we are now becoming able to study non-aquatic animals as well. Studies where accelerometers and recorders are attached to birds are increasing, and their behavior after flying away from the nest is gradually becoming clearer. In the future, we might be able to attach them to insects too. As long as there are new ideas, the hopes are high for new, unique research.
I myself had the opportunity to study cheetahs, which are land animals. I went along with the staff of a TV program to South Africa to try to answer the question “Can cheetahs really run at 100 km/h?” When we measured the cheetahs using GPS, the result was around 60 km/h, which is a far cry from 100 km/h, of course. The TV staff was disappointed, but I instead focused on the energy efficiency of wild animals. Accurate measurements have been done in the past, so cheetahs probably can really reach 100 km/h when chasing after prey, but if they ran at such speeds every time, they would soon get exhausted, and might even sprain a leg or injure themselves. After all, animals too prefer to take it easy, and 60 km/h is quite fast enough. We noticed something similar when researching the swimming speeds of aquatic animals. From whales to penguins, they all swam at an average speed of 2 m/s when diving down from the surface to catch food below and then coming back up. 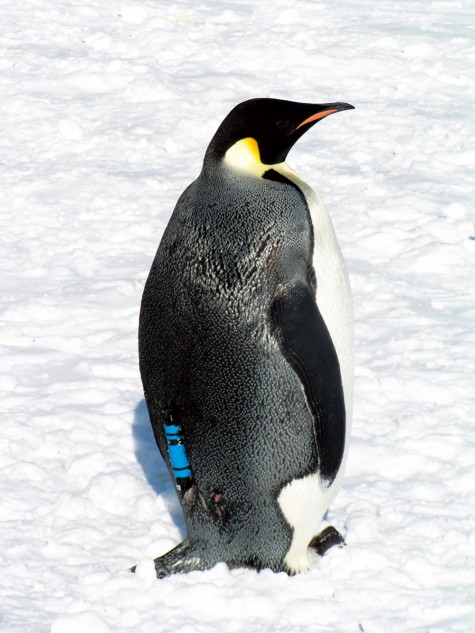 Perhaps that is the most energy efficient speed. It is not as if they are living on the edge all the time, they live with time and energy to spare.

As our research is gaining in social recognition, this notion of time and energy to spare is something I secretly hope will help raise the cultural level of Japan. Sad to say, when doing animal research in Japan, practical use is almost always the main requirement. Research to raise the productivity of livestock or the fishing industries is considered important, while only a minority of people is ready to recognize the value of research with seemingly little practical use. In the United States and Europe, on the other hand, there are plenty of professors doing unique research, and this relates to the scientific and cultural depth of those countries as well. It is high time for Japan too to look in that direction, I believe. Back when I wrote my thesis on sea turtles, people kept asking me “what’s the use of that?” but now the wind is changing.