Everybody uses towels every day, from babies to the elderly. Few other objects are so familiar, or so often in direct contact with our skin. The material is normally cotton, which humankind has been using for thousands of years. But what are the requirements for the ideal towel, the one that is most comfortable to use? We asked a maker who is committed to domestic production and is striving to create a towel with the full inherent 100% water absorbency of cotton.

We all use towels every day to dry our skin when we’ve washed our hands, when we are sweating, when we get out of the bath. Although towels made from synthetic fibers do exist, almost all are 100% cotton.

Cotton is a material with superior water absorbency, and since the tips of the fibers are rounded, there is little irritation and it feels nice and soft when touching the skin. Cotton itself originally contains a large amount of oil that repels water, but somewhere along the course of civilization people discovered that by removing the oil from the cotton flowers, cotton became a great water absorbent material instead. Various new high-tech materials have been developed, but cotton retains its position as the most familiar, most natural material.

Towels reportedly arrived in Japan during the Edo period. In 1963, Baika Boshoku (now Hotman Co., Ltd), a long-standing maker of cloth and bedclothes (mattress and cushion covers) in the Ome area of Tokyo, became convinced that the towel age was around the corner and started manufacturing towels. At the time, the industry standard was to use the cheapest, thickest threads for towels, but Hotman took advantage of their long experience and began producing high-quality towels made with thin threads instead, and their towels soon gained popularity as luxury items.

Generally speaking, division of labor is increasing in the towel industry, but Hotman does everything in-house, from planning and design to weaving, dyeing, cutting, sewing and distribution. They also have their own shops across the country, and prefer to deliver their products directly to their customers. Currently, 80% of the towels sold in Japan are imports, and Hotman is the only domestic maker that still controls the whole manufacturing process in-house. 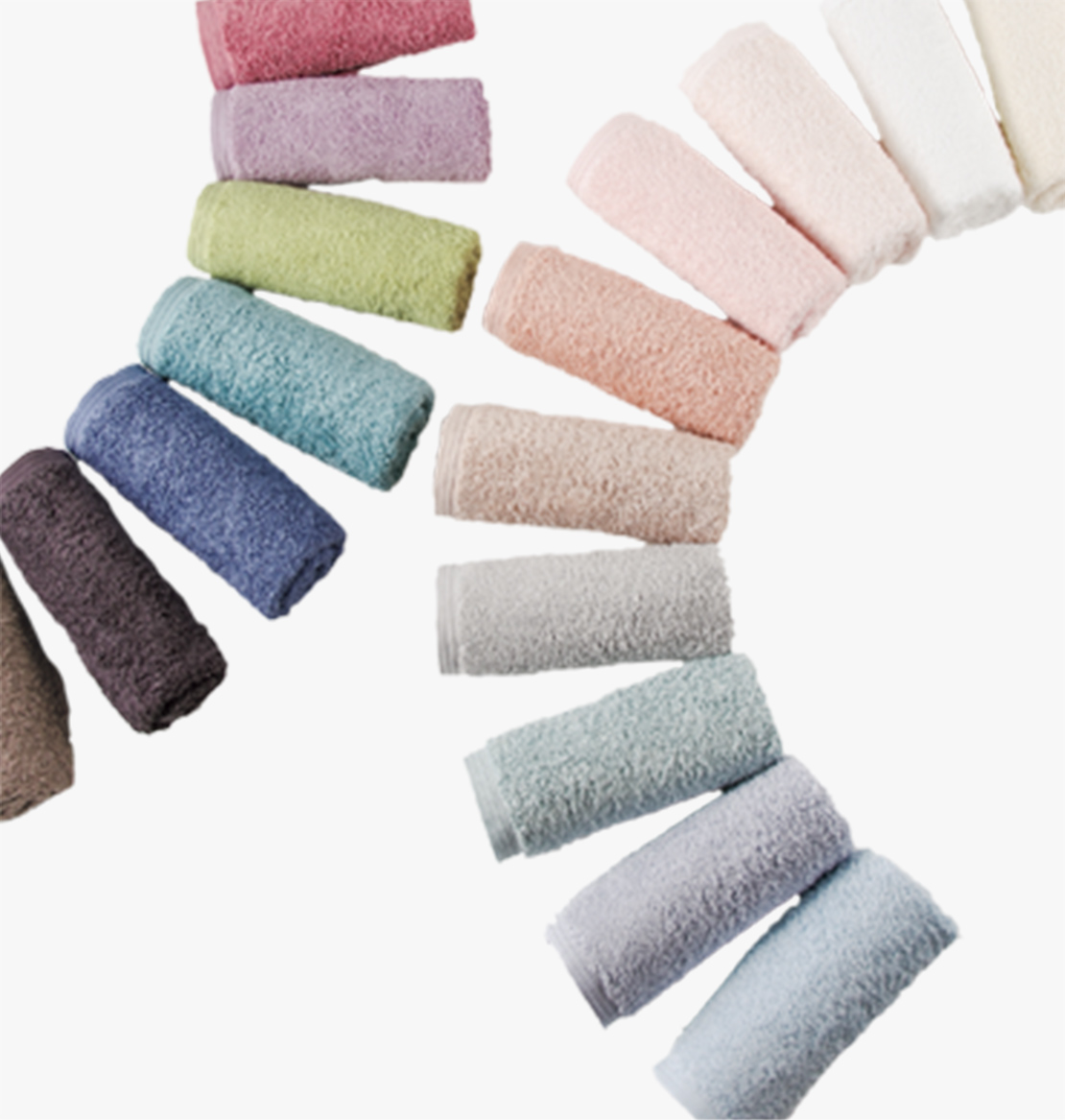 Not even kansei engineering knows what the ideal towel looks like.

Hotman’s president, Masayuki Sakamoto, is a graduate of Shinshu University’s Faculty of Textile Science and Technology.

“Shinshu University is the only national university that still has a textile science faculty. I was in the first class to study kansei engineering there.”

Kansei engineering is a discipline that combines engineering with human sensitivity, and Hotman keeps doing joint research with Shinshu University to develop the ideal towel.

“For example, how do you physically measure and put a numerical value on the softness that people feel from a towel? We do sensory evaluations and so on, of course, but there are still many things we don’t yet understand. People who have towel-related memories evaluate the same product quality completely differently than people who don’t have such memories. Human sensibilities cannot be expressed with a single index, they are a combination of multiple indicators and that person’s individual thoughts. It is not just a question of the stimulation received from the surface of the towel, but the image in the brain and previous experiences of towels as well. It is difficult to evaluate all these factors comprehensively, but it’s also very interesting.”

Another problem is that while users sometimes complain that something is not good, they rarely say specifically what they want. “In the end, it is we manufacturers who are the professionals. We have to lead the customers along,” Sakamoto concludes.

“Hotman’s best towels are well-balanced towels, I think. What is well-balanced, then, you may ask, but it is hard to put in words or numbers. If you use a certain thread, for instance, then such-and-such a degree of softness is appropriate. It is a complex sense of balance that I care a lot about.” 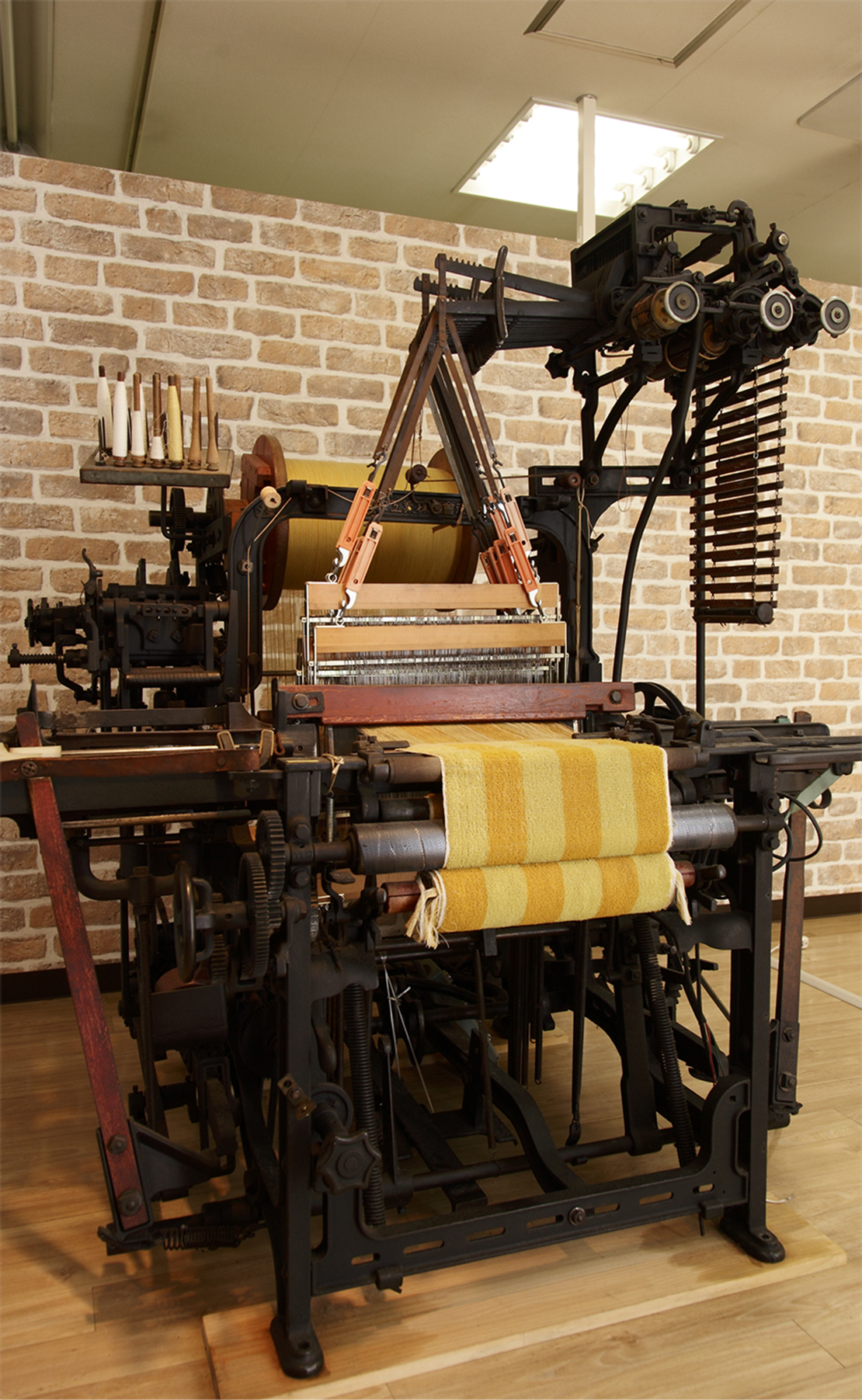 Softness is the major index when evaluating towels.

If towels with the same pattern, size, price and quality, but different grades of softness are lined up in the store, people overwhelmingly choose the soft ones.

For that reason, towel makers add softeners to their products to make them feel softer in the store. However, when softener adheres to the towel’s surface, it impairs the cotton’s water absorbency. The biggest reason why newly bought towels are so poor at soaking up moisture is most likely the large amounts of softener clinging to them.

“Some customers have sensitive skin or allergies to chemical substances, so we don’t use any softeners at all. Towels are used in direct contact with the skin, so it should be obvious that they must be safe for everyone to use. The way many manufacturers make products that are easy to sell is very irresponsible, I think.”

Sakamoto also wishes people better understood the merits and demerits of softeners before using them at home.

“The reason why softness becomes the most important criterion when purchasing towels is probably because you can’t actually try them in the store.”

Believing that people ought to judge towels by their original function, their capacity to soak up water, Hotman developed the “1 Second Towel,” which instantly absorbs moisture when you touch it to the skin. There is no need to rub your body after getting out of the shower, and it feels nice and gentle on infants’ skin too.

“We wanted a name that is easy to understand. It is a straightforward towel that puts absorbency above everything else, I think.”

Taking advantage of Hotman’s integrated production system and the know-how that the company has accumulated over many years in order to pursue the water absorbency of cotton to the very limits, the 1 Second Towel became a big hit.

“We still stick to domestic production, but it is no longer a good idea to think something is of high quality just because it’s made in Japan. There are many companies that make high quality products in China, too. If you manufacture in Japan, you can do so-and-so, people say, but unless you can explain how that leads to higher quality it’s meaningless.” 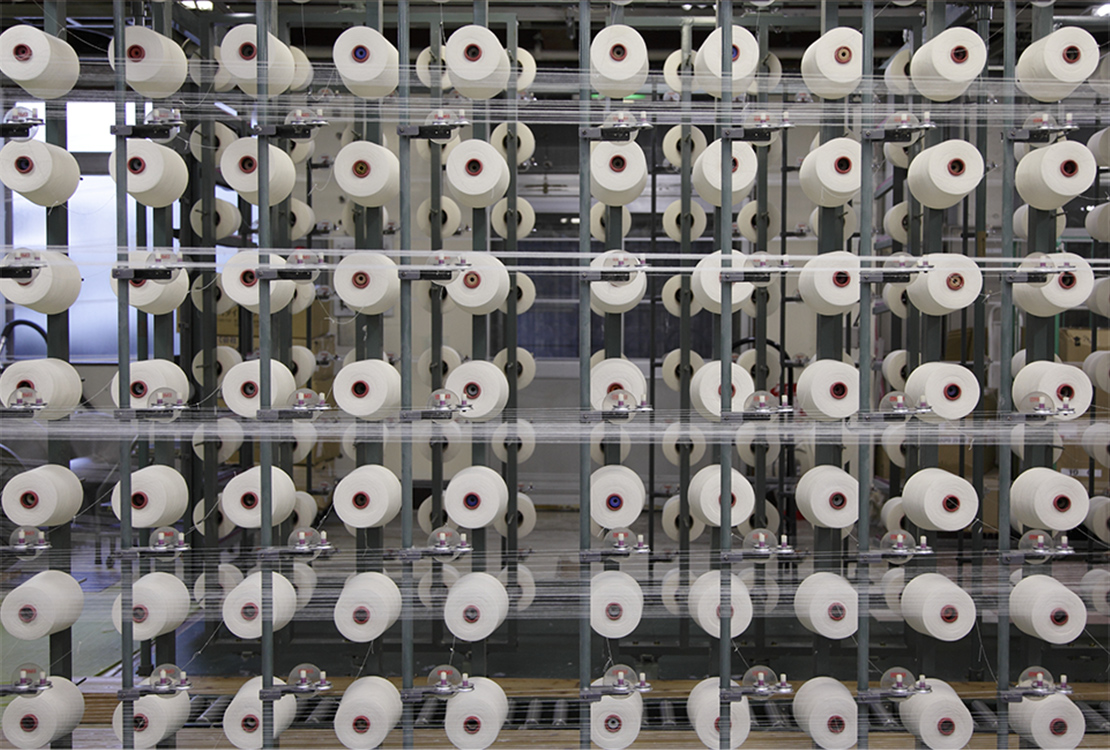 “Warping” at the head office factory in Ome, Tokyo.