When escalators were first introduced in department stores, people often got stuck or fell over in front of the steps because they couldn’t get the timing right. It happened to quite a few people, young and old, men and women alike. Such problems go hand in hand with any new technology, and IT is certainly no exception. Old people looking bewildered in front of ATMs and ticket machines are a common sight, but it is by no means just a plight of the elderly. Many of us have experienced dreadful mishaps with novel technologies. Thanks to the progress of the IoT we may one day be released from such troubles. New technologies will cover the deficiencies of the old ones, as it were. But more likely we will just keep adjusting our behavior and lifestyles to the technologies of the day, without even noticing. In either case, there is no doubt that technology is steadily taking over the role of human beings. When objects, processes, even knowledge, can all be controlled through IT or the IoT, the last remaining domain for humans might be things like feelings, emotions and desires. You can provide a machine with “senses,” but it won’t be able to “taste its feelings.” Perhaps what awaits us beyond the IoT is a world of the senses, similar to the one faced by our remote ancestors before the invention of language or tools. Since the IoT is already up and running, now is in fact a great opportunity to look back and consider what it used to mean to be human. It is a theme to reflect upon while you climb up the stairs under your own steam, before you stumble on the escalator.

“Verbs” were originally words expressing human actions. But as actions become technologies and are replaced with tools, “verbs” are also gradually becoming “nouns.” With the growing effect of IT on verbs, soon the only actions lefts for humans to perform may be those most profoundly connected with our urges; that is, eating, sleeping and propagating. But even those are already becoming increasingly hard to perform without technology. Perhaps the future of IT and the IoT should be to help humans recover the “verbs” we are now slowly losing. 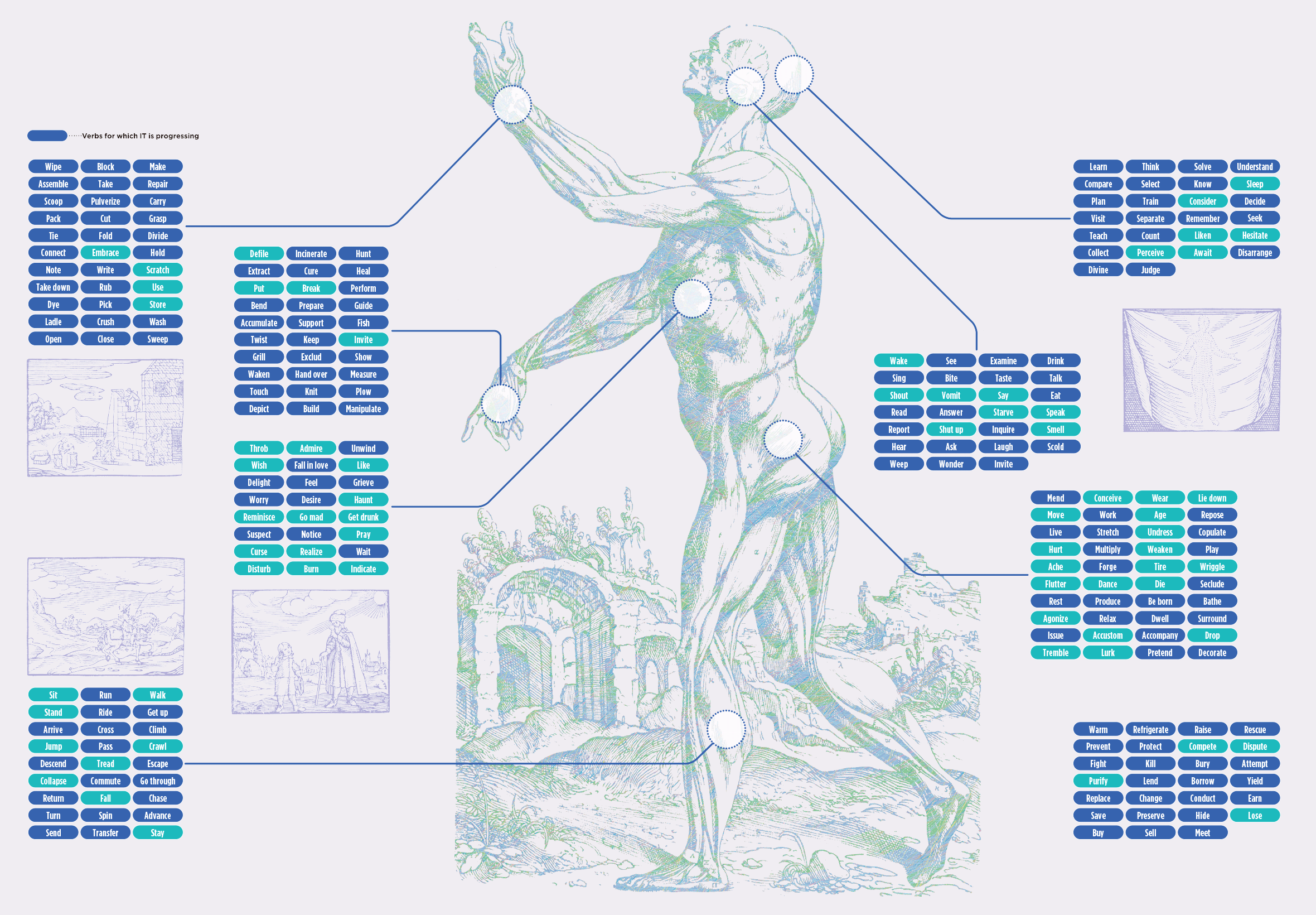 The progress of civilization is also the history of inventions and discoveries. Thanks to inventions and discoveries humankind has acquired many conveniences and expanded its abilities. The division and sharing of activities, or entrusting other people or machines with large parts of the work, has increased efficiency even further. However, replacing human capabilities with tools and systems leads to a deterioration or even the loss of those originally inherent faculties. Perhaps we need to rethink what each one of us would be able to do if our tools and systems were lost.

Through upright bipedal locomotion and the acquisition of tools, fire and language, humans became something quite different than the other animals. Fire led to the creation of metalware, while the habit of cooking with fire transformed the environment inside the human body. However, communication using language also led to a decline in our ability to read the signs of nature.

The power of memory

The invention of writing instantly accelerated the evolution of civilization. On the one hand we got “documents,” but at the same time our power to memorize diminished. Eventually “memories” that were not officially recorded were treated as nonexistent. In our computerized age, our power to memorize is once again falling off dramatically.

The power of the individual

The start of settlements and farming was also the origin of countries. In particular the cultivation of storable cereals meant food reserves and wealth overall. Crops like rice and wheat that are difficult to grow efficiently by individuals led to cooperation, systems for division of labor, and the entrusting of more and more functions to the “country.” Today, the Cloud is becoming yet another “country.”

The power of movement

Thanks to the invention of the wheel, it became possible to transport large quantities of goods long distances in a short time. The use of oxen and horses further increased the efficiency. With people living in permanent settlements, there were much less need to move around on foot. Not having to walk was a privilege for a select few in ancient times, but modern people seem to be abandoning bipedalism itself.

The sense of direction

The so-called “Four Great Inventions” of Ancient China still have a tremendous influence on human civilization. The compass meant that people could determine the correct direction even while traveling. But on the downside, the ability to determine one’s position after the sun and the stars was lost. The “surface” sense of direction became a “line” sense, and now with GPS our sense of position has been reduced to a “point.”

The powers of the dark

It goes without saying that household appliances have changed our way of life, but above all air conditioning and electric light have taken away our innate sense of time. The darkness of the night has vanished, and although it is nice to live at a constant temperature and humidity, our sense of the seasons has grown thin, and our biological clocks and self-regulating functions are going haywire.

The powers of the hands

When the monetary economy was established in the Middle Ages, tools became goods to trade. Their users became craftsmen, and the division of labor progressed further. Improved or repaired necessities could easily be bought for money, and traditional manual skills were forgotten. Now even money itself is changing from bills and coins to “data.”

The power of futility

The power of disease and death

The power of prediction

The development of modern science has improved prediction technologies by leaps and bounds. The future can be steadily predicted as long as the boundary conditions are defined. But as soon as we lose track of those boundary conditions, “unexpected” situations immediately occur. Nevertheless, intuition and precognitive abilities that might predict even the unexpected are rapidly replaced by science and technology. 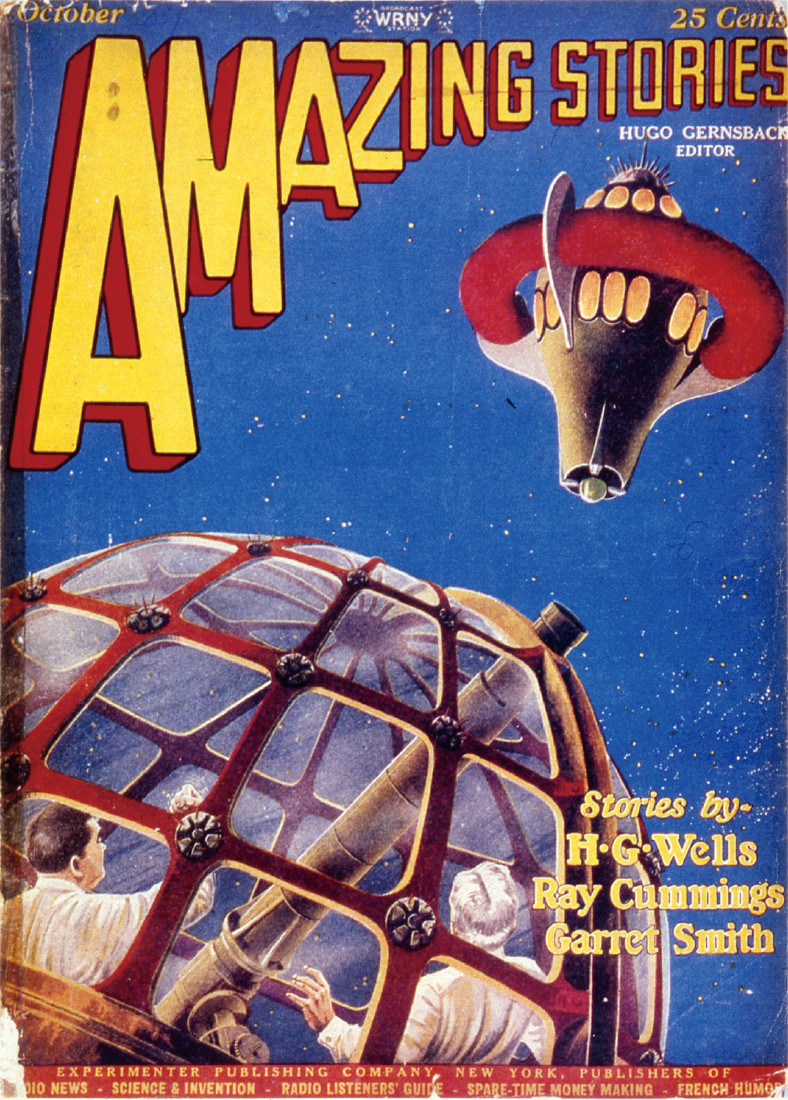 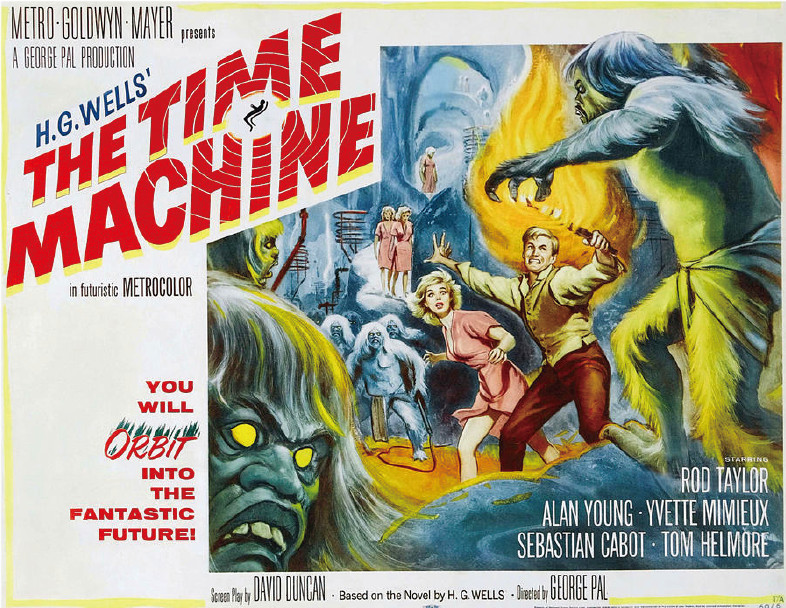 The technological utopia on the cover of the SF magazine Amazing Stories vs. the pessimistically depicted future on the poster to the movie The Time Machine (1960). Which world awaits beyond the door to the IoT?