Matagi are a group of traditional hunters in northern Japan. The etymology of the term is uncertain, but it may derive from words meaning "stronger than demons" or "straddling mountains." Out of fear of the mountain gods, matagi use a special language when they enter the mountains so as not to pollute the hunting grounds with the "dirt" of everyday life. For example, "bear," which is called kuma in standard Japanese, is itazu. Sake is called kiyokawa. In old times, they used bow and arrow, or spears. Matchlock guns were introduced in the Edo period, then Murata rifles in the Meiji era, and now they have modern rifles. According to legend, the first matagi were the brothers Banji and Banzaburo, who were famous for their archery skills. In a dispute between the goddess of Mount Nikko and the god of Mount Akagi, Banzaburo helped the goddess by shooting out the eye of the Akagi god, who was incarnated as a giant serpent (or a giant centipede in some versions of the story). In return for his meritorious deed, the goddess gave him a scroll granting him the right to hunt in all mountains of the land. 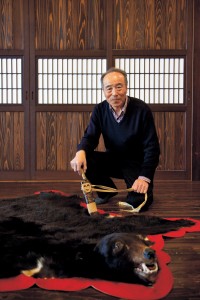 I have GPS in my head

The origin of matagi and their sensory skills

Poster for the Japan Railways group’s campaign “Natural Beauty Akita.” The man in the middle in ancient matagi clothing is Matsuhashi. 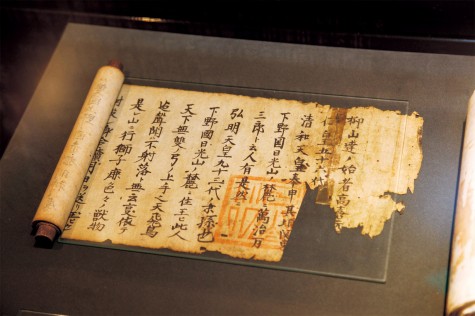 The Origin of the Yamadachi scroll is handed down through the generations in the house of leader of the matagi. The contents may have altered somewhat through successive transcriptions.

The changing habits of bears

They say that bears do calisthenics when they awake from hibernation, but even after sleeping for five months they can still climb trees and run at full speed almost immediately. If humans were to sleep for five months, they would have to start from the rehabilitation clinic. There are researchers who think it would be fabulous if humans too had such abilities, and study the physiology of bears from that perspective.
The cubs are born during the winter, and the mothers wander around with them for the first year to teach them things. Then, after the next winter, around May or June, she lets them go fend for themselves. “Putting them among the strawberries,” we call it. She leads them to a field full of wild strawberries, and while the cubs are busy munching on the delicious berries, she leaves them and runs far away. From that point, she absolutely refuses to accept them anymore. It’s the coming-of-age ritual among the bears.
When a mother is out wandering with her cubs, the cubs play around and run all over the place, so that she has to call them back. They also cry out. When you walk among quiet mountains, you hear if there are mothers with cubs. And when there are territorial fights among the males, the mountains are roaring with their voices.
Before going hunting, we avoid smoking and stuff like hair tonic in order not to announce our presence to the bears. Nobody goes as far as doing water ablutions anymore. But recently, bears are getting used to humans. The bears that sometimes appear among human habitations are such bears that have grown accustomed to humans. People leave food scraps and litter in the mountains so that the bears get familiar with human smells. By nature, we are their only natural enemy. By nature, bears teach their cubs to be afraid of humans, but recently it seems that some of them don’t imprint the fear of man in their cubs. Just like there are people who behave in unreasonable ways in human society, there are bears that are out of order in the bear society. A bear that has been shot or had a frightening experience will never come down to human habitations. No matter how delicious some morsel might be, if it smells of humans the bear won’t touch it.
Matagi only catch the necessary minimum. If we are to preserve our traditions and keep hunting, we can’t catch wild animals indiscriminately. We have to protect the forests as well. Before, the fields and forests in semimountainous lands were well kept, but nowadays many lie waste. For bears and other wild animals, there is no longer any difference between mountains and semimountainous areas. When I was a kid, it was unheard of for bears or serows to come near human villages, but now bears are frequently seen in many towns. The natural balance seems to have been disrupted. In another ten years, the number of wild animals will have increased so far that we’ll have a serious situation on our hands. One major reason is the diminution of hunters. The Swords and Firearms Control Law is extremely strict, and the hunting tax has become exorbitant. The tax rate is the same for both professionals and hobby hunters. However, matagi are completely different from modern hunters. Hunters go it alone, and don’t worry about rules or traditions or the teaching of their predecessors. Matagi take the wildlife populations and the condition of the animals and the state of the mountains into consideration when we hunt. Matagi have fixed allocation rules. If ten people participate in the hunt, all ten have equal rights to the captured prey. Each receives the same amount of meat, including those who were only standing by watching. For most modern hunters hunting is a game, where the result of each individual counts.

Matagi are famous for hunting black bears, but here in Ani the main prey used to be serows. Before WWII, the best soldiers’ clothes for use in cold climates, that is, the clothes with the best heat insulation, were made of serow skin. The meat was also delicious, they say. The horns were used for squid fishing and as lucky charms for fishermen. Stonefish and serow horns used to be exchanged between the mountains and the sea. This was all before the serow became a protected species, of course. Since then, our main target has switched to bears. Bearskins too are warm, and bear stomachs, or rather gall bladders, command high prices.
When we have brought down a bear, we lay it on its back with its head pointing west. If you leave it lying on its stomach and it’s just playing dead, it will jump right at you. Once we have confirmed that it’s really dead, we cover it with holly branches and chant an incantation to guide its spirit to the next world. This chant has been handed down through the Origin of the Yamadachi scroll. We also have chants for when we enter the mountains, when a prey has been captured, when skinning it, etc. These have been transmitted over many generations, so the words and the direction of the bear’s head are apparently slightly different between the various matagi branches.
Next, we take three cuts each of the heart, the liver and the loins, put them on three skewers that we hold in our hands and burn as an offering. The first is to the mountain god, and the other two are a prayer for a continued good hunt. Sometimes we cut up the body before we bring it down, but sometimes we drag it down as it is and cut it up in front of the villagers. 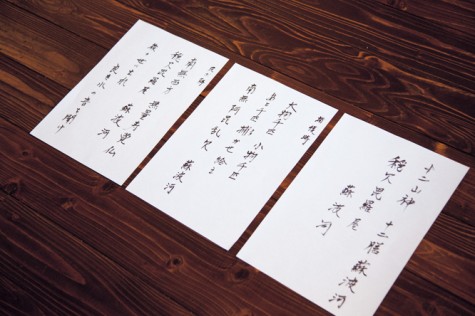 Spells recorded in the Origin of the Yamadachi scroll, and incanted (right to left) when entering the mountains, capturing prey, and skinning the prey (or cutting up the body). The chants appear to be influenced by Buddhist mantras. 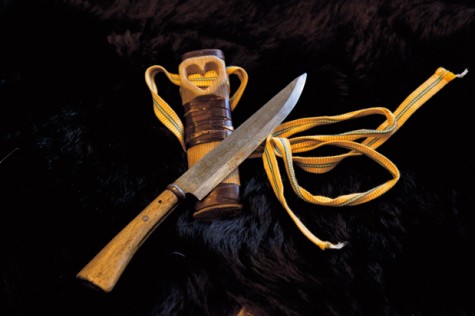 The nagasa knife is the indispensable tool of a matagi. The base of the blade is utilized to cut trees, while the tip is used to cut meat and skin the prey.

Unless you go into the mountains even when the weather is a bit bad, you will never accumulate experience. Over the years, you gradually master skills like finding the safest route to take when it’s getting dark, or when the mountain streams are flooding, or on a day when an avalanche might occur. You know the terrain and the look of the mountains by heart, and you know where you are. It’s like having GPS in your head. You won’t get lost even when it’s dark. The country’s Disaster Prevention Division keeps wondering why it is that matagi never seem to meet with disasters.
In the mountains, we use a special matagi vocabulary, because it was once believed that animals could grasp ordinary speech. When pointing out the route through the mountains too, we use place names that are not found on any map, words that only matagi will understand.
In the mountains it is obviously absolutely forbidden to point your gun at other people, but pointing a stick or a branch is also wrong, as it will intimidate the other. Shouldering your gun is prohibited, as it might go off accidentally if you fall, which is dangerous of course, but it’s also because when a bear is attempting to escape, we say that it’s “shouldering.” Shouldering simply means bad luck. If anybody breaks a taboo like that, we call the hunt off there and then. In the old days, it was taboo to approach women on the day before entering the mountains, but we are not quite that strict any more.
I have had plenty of strange experiences in the mountains. You hear the buzz of a chainsaw cutting down trees, a rustle in the leaves even though no wind is blowing and then the sound of a tree crashing down. It seems like somebody is there, but when you get to the spot there’s no sign of people and no trace of a fallen tree, just quiet as the grave. They say it’s the workings of raccoon dogs, but of course there aren’t any of those around either. There are many mysterious things in the mountains like that. I’m never afraid of going into the mountains, but I’m always a bit wary of another weird experience.