The history of sake-making is also Japan's hidden history of science of technology. In ancient times, "mouth-chewed sake" was made using enzymes in saliva to break down the starch in rice to sugars and airborne yeast spores for fermentation. Brewing with koji has also long been known, and a sake-brewing system was established by the imperial court already before the Nara period.
Compared to other fermented brews like beer or wine, the manufacturing of sake is an extraordinarily complicated procedure, and the process control requires sophisticated skills based on a knowledge of "chemistry" and "microbiology" and an intuition honed through long experience. One example of the advanced Japanese techniques is heat sterilization of the brew, which was applied as early as the Heian period, or more than 500 years before it was used for making wine. Mass production of modern-style sake began in the early Edo period, and soon "master brewers" (toji) made their appearance as directors of the whole process. 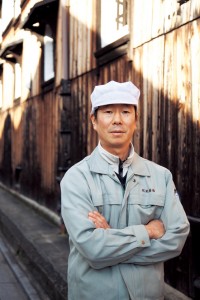 Machines have no intuition

The fermentation takes place at a low temperature and the target is about 8 degrees. At the start, the temperature needs to be around 12, 13 degrees to get the yeast going on the second day. For highly refined junmai dai-ginjo, the target is about 6 degrees.
Intuition will tell you at what degree to stop, how far to cool the rice. When making koji too, you have to judge by how it feels in your hands. The first step in koji-making is spreading out the rice on the bed. When using automated control I do look at the thermometer, but in order to decide at which temperature to spread out the rice, I have to hold it in my hands at that stage in the process. If it’s cold outside, that also must be taken into consideration. For small batches, the conditions are even stricter. I touch the rice on the linen cloth to check the temperature, and then give the order to bring it into the muro. There we wait for the steamed rice to reach an even temperature before sprinkling the koji on it. When I was a greenhorn I heard one of my seniors say to bring in the rice at about 34, 35 degrees, but when I stuck my thermometer into the rice, he yelled at me: “Don’t be ridiculous! Your fingers will do!”
The job of the master brewer is to supervise the sake brewing. Under him, there’s a head, a koji-maker, a moto-maker and various other staff. The function of the master brewer varies between breweries, though. Some make both koji and moto and everything else by themselves, while others just sit back and give orders and leave the koji-making to the koji-makers. But the master has to function as the coordinator of all the staff. 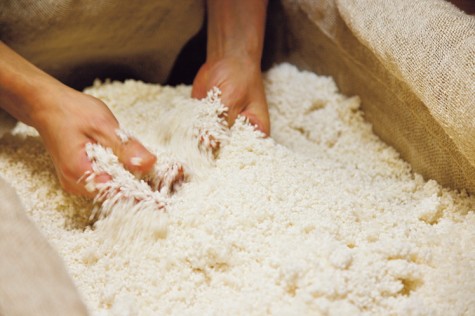 Adding mold spores to steamed rice to make koji. Confirming the state of the koji requires a general mobilization of the senses: sight, touch and smell. 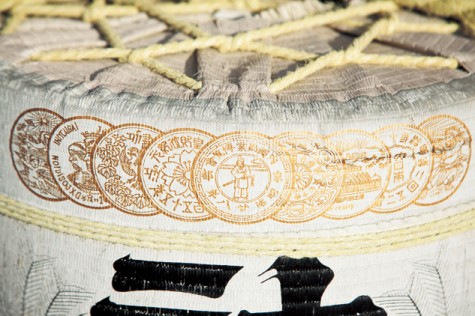 Komodaru barrels are a familiar sight at Japanese opening ceremonies. The straw wrapping was originally added to protect the barrels during transportation.

My official job title is Plant Manager, but in practice I also do the work of a master brewer. How long it takes for a new employee to become a master brewer varies between individuals. Some can do it in five years, other may need more than ten. It is only when others recognize you as a master brewer that you have become one. I still have a long way to go and wouldn’t presume to call myself a master.
Small batches are still done by hand, just like the masters did in the past. Even machine-made sake is really man-made, I’ve come to realize. It just boils down to a question of quantity. Sake-brewing starts by soaking rice in water, and already from that stage you have to be extremely careful. You can’t take your eyes off it for a second. You have look after it all the time. That will probably never change, no matter how far the technology advances.
Aside from the brewing craft, I learned many other things from the old master. In order to make good sake, you have to work closely as a group for half a year, so it is important to keep on good terms with each other. Bad-mouthing each other is absolutely not allowed, he told me.
Both the master and the rest of the staff were very deft with their hands. They made their own tools. For example, the heads thought up and constructed the basket used for transferring steamed rice to the tank, without any drawings. In fact, all heads I know are very handy and can easily fix complicated problems with the plumbing. These old-school people have adapted beautifully to machines as well. Whether they use machines or old-fashioned tools, they know how to make good koji, and at what temperature to stop the batch. I still have a lot to catch up with there. They also know the microbiology and chemistry necessary for sake-brewing by instinct. We have to absorb what we learned in school, and keep studying based on our own experience.

Honing the intuition by making mistakes

If you lack experience, your intuition won’t work. It is only by accumulating failures and trying some fairly far out things that you will learn how far you can go. When you observe the senior staff you may think of a cleverer way of doing a certain procedure. It is when you try it for yourself and fail that you understand why the seniors were doing it the way they did. Sometimes you might come up with an actual improvement, of course. You have to find out by trial and error. There may be people with superb intuitions who get everything right from the beginning, but such people are extremely rare.
When making koji, it is not only the temperature, you also have to feel the hardness by hand. Whether the rice is steamed all the way through, whether there still is a hard core, whether the rice is cracked or whether it’s sticky. Sticky rice in particular is disqualified when making koji. If it is sticky, that means the grains are moist on the surface and the mold hyphae are wrapped around the grains. This is something you have to feel. The condition of the rice cannot be analyzed. You have to be able to tell whether it’s good or bad the moment you touch it with your hands. 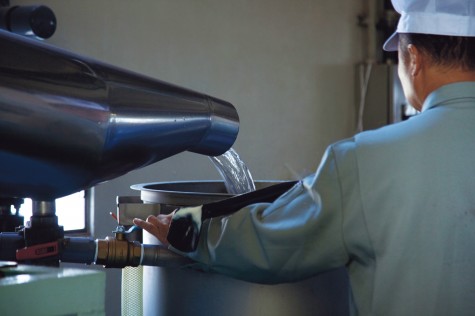 The quality of the water used for washing the rice and for brewing has a huge impact on the flavor of the finished sake. 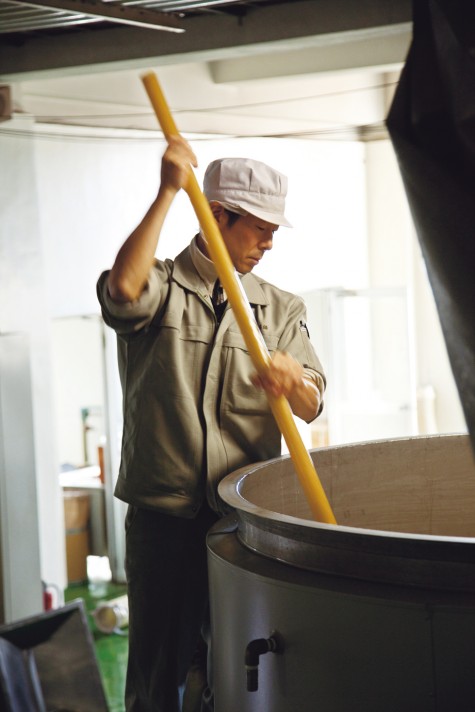 The mash is stirred with a wooden stick to help fermentation.

When making a large batch, the steamed rice pours out continuously from the machine, and the feel is different at the beginning and at the end. The question is at what point to decide. Mechanization may be progressing, but this is still difficult for large batches.
We soak the rice so that the middle 80% will become good steamed rice while the uppermost and lowermost 10% are discarded. It’s like a game where our mission is to adjust the given environment into conditions suitable for making good sake, and then watch carefully over it, regardless of the size of the lot.
In order to hone your senses and make use of them, it is important to take care of your health. It absolutely won’t do to catch a cold. If you are in charge of sake-brewing, you can forget about taking time off for the new year holidays, and when making koji, or small batches, you practically have to work around the clock.
There are also an old rule to avoid eating fermented foods like natto. It may not affect larger batches, but we are always making smaller batches too in parallel, so you have to be careful about such things as well.